Liverpool suffered a huge blow in their quest to land Premier League title for the first time in 24 years, last Sunday, when they lost 2-0 against Chelsea at Anfield. Though the Merseyside giants can still win the league, but they don’t have the control over their destiny anymore.

However, even if they do not win the league, it will still be considered as a successful campaign under Brendan Rodgers. And a crucial summer awaits for Rodgers and Liverpool.

For the first time in many years Champions League football will be back at Anfield and Liverpool must prepare to bolster their squad to compete on all fronts. 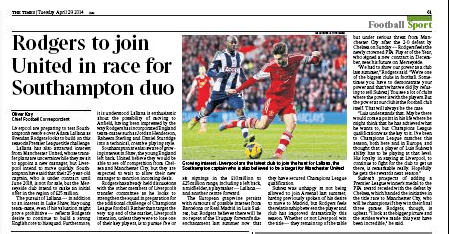 According to reports from The Times, Liverpool are set to rival Manchester United to sign Southampton duo Adam Lallana and Luke Shaw.

Lallana is a transfer target of Manchester United, but with the Red Devils uncertain over their transfer plans as they prepare to find a new manager, Liverpool intends to move quickly. The Reds intend to make an initial offer in the region of £25m for the 25-year-old, though Southampton have made it clear they will not part with their skipper, who has a contract till 2018.

Furthermore, Liverpool are also interested in Lallana’s team-mate Luke Shaw, as the Reds looking to buy a top quality left back next season.

Oliver Kay writes that Rodgers have held talks with the members of the transfer committee of Liverpool and he is  keen to bolster the squad, with managing director Ian Ayre stating the club will go to any extend to sign a top player, if the manager feels necessary.

Liverpool are keen to pursue five or six signings in the £10m to £25m range, unless they lose any one of their top players in the summer, which is highly unlikely.

The Merseyside giants need a left-back in the summer but I’m not sure whether they’ll pay £30m or so for Luke Shaw. Manchester United camp however feels they’ve already secured a deal for the 18-year-old and would be able to see off competition from Chelsea and Manchester City.