Liverpool’s title dream if edging closer to reality as Brendan Rodgers’ side now find themselves in a commanding position at the top of the Premier League table after a nervy 3-2 over Norwich on Sunday. Raheem Sterling put the visitors ahead with a sensational 25 yard creamer before Luis Suarez doubled the lead for the travelling side. 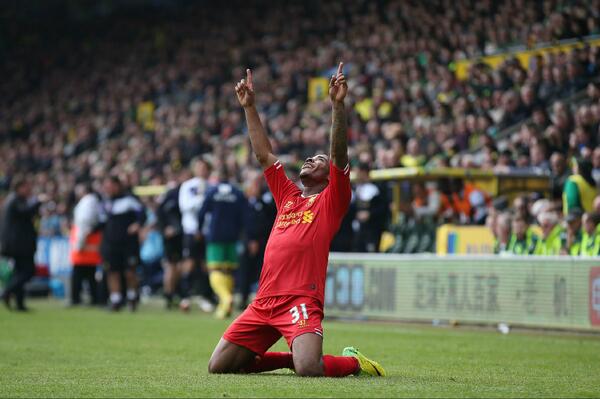 The Canaries however, egged on by the home faithful got themselves back following Gary Hooper’s tap in following Simon Mingolet’s error. Sterling’s deflected effort then restored the two goal cushion for the Reds before Robert Snodgrass’ header set up a nervy finish but Liverpool held firm to gain a huge win.

The Belgian costly error gifted Norwich’s opener failing to clear Whiattker’s cross from the right as Gary Hooper scored with a simple tap in. Mingolet however held firm from Van Wolfswinkel’s header late on.

The right back looked anonymous throughout the encounter and it was his failure to stop Olsson’s cross from the flank which set up Snodgrass’ header.

The Frenchman looked unconvincing and woefully dodgy throughout the encounter.

Yet another impeccable display from the Slovakian who was rightly a colossal at the heart of Liverpool’s defense.

Showed great work rate bursting forward with his runs in the first half but looked subdued as the match prolonged.

Once again played in his quarter back role and often drafting in as a third centre back. His passing was as usual brilliant showing great deft and controlling the tempo of the encounter.

The Welshman had a great first half and Ruddy saved well from his great effort early on. Allen was however too sloppy in the second half.

Interestingly the Brazilian was given a more advanced role but looked out of game and was booked late on. Lucas however should have scored from Suarez’s delightful cutback but failed to hit the target.

Once again, his movement was simply sumptuous, starting from the left showing great enthusiasm and the willingness to track back to help his defense.

My man of the match. Sterling opened the scoring with a thunderous shot inside three minuted and then was lucky to get his second following a deflection. His runs off the ball was a delight to watch.  Also provided the assist for Suarez’s tap in.