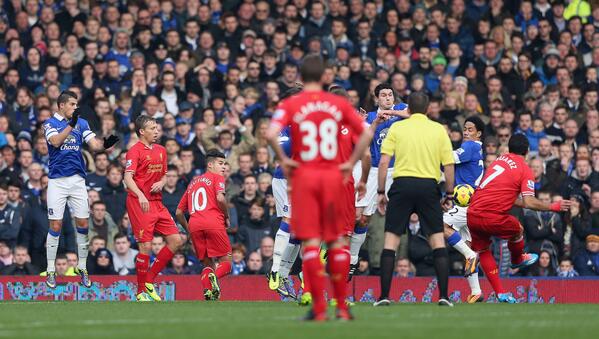 First, what a match! What a derby! Incredible and breathtaking stuff! It had everything a derby needed to be – drama, passion, controversy, goals, talking points – everything.

The scoreline read 3-3 but it could have easily been any margin given the amount of chances both the teams created and missed. Let us take a look at the Liverpool player ratings for this match.

He had nothing to do with three goals Liverpool conceded. No goal keeper can save those. But, he made 9 saves in this match. Yes, 9 save and saved the day for Liverpool as well.

Everton really toyed with Liverpool defence, especially in the second half. Skrtel was directly responsible for his poor clearance in the first half that led to the opening goal for the hosts.

The big Dane wasn’t too impressive like his partner. He was troubled throughout the match by the sheer presence of Romelu Lukaku.

The England right back as usual looked terrific when going forward but defensively could have done better. Much better performance in the second half, once Baines got subbed.

The local boy was played out of position (left-back) but he never looked out of place for a single moment. He was beaten on few occasions but overall, he was rock solid.

The Liverpool skipper wasn’t too impressive in his midfield duties. Countless number of times he misplaced his pass, lost the ball in midfield, exposed the defence but his two brilliant deliveries from set pieces earned Liverpool two goals. It shows at this age, how vital he still is for this club.

The Brazilian for me has had an ordinary game too. He gave away two needless freekicks, and was rightly punished by Everton for that. Picked up yellow card and Rodgers was forced to sub him. Lucas’ main job is to provide security to the back four – how many times you’ve seen Liverpool defence got severely exposed? Not good enough.

How on earth he missed that open goal? He will never want to see that replay again. That goal could have changed the complexion of the game, as Liverpool were leading 2-1 at that point.

Hard working player as ever, he was omnipotent in the midfield. Gave a constant support to Johnson on the right flank, dropped deep every time to support the midfield and later on, played in the central midfield role with adroitness.

The Brazilian was the central creative force for the Reds but he was strongly marked. Linked up well with Suarez and bagged a goal too.

Operating as a lone striker, he was absolutely sensational as ever. That freekick was a stunner. He became the joint top scorer of Liverpool with 9 goals from 7 games – Genius.

He was on pitch for less than 20 minutes but his impact was immeasurable. He not only scored the decisive equalizer but that goal will lift the spirit of the entire team as well.