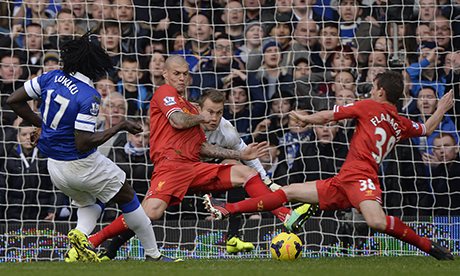 Despite drawing 3-3 against Everton at the Goodison Park on Saturday, Liverpool maintained their second spot in the Premier League. It was a typical derby; it had everything – passion, drama, controversy, goals, entertainment – everything.

Liverpool manager Brendan Rodgers should be happy with some of the things like his side’s mentality to fight till the end, sharpness in front of goal, individual bravura, but few things he needs to sort it out quickly, before it is too late.

First, he needs to do something about the defensive organization of his side. He not only needs to find the right formation – be it a 3-man central defence or 4 at the back, but also, should find the right person to do the job.

They were vulnerable against set-pieces while the defence was ran-ragged in the second half completely against Everton. Something needs to be done. May be by bringing Mamadou Sakho in the mix, tweaking the system or whatever – this habit of conceding goals after taking the lead should stop.

Secondly, Rodgers needs to do something with the midfield. Steven Gerrard-Lucas Leiva partnership at times doesn’t give enough solidity and stability as well. Don’t get me wrong here – Lucas is a very good player but he is not a top class defensive midfielder. Tackling is not the main attribute for any defensive midfielder – his main job is to provide a shield to the fellow defenders behind.

If you have watched the match carefully, it was his needless foul that earned Everton free-kick and goal subsequently in the first half. And how many times the defence was left exposed by him? Also, his partner, Steven Gerrard is far from being a regista or a deep lying playmaker though he operates in that role. He still has the habit of playing Hollywood passes when a shot clever simple passes was enough to unlock a defence. In a nutshell, Liverpool needs more control, guile and authority in the midfield.