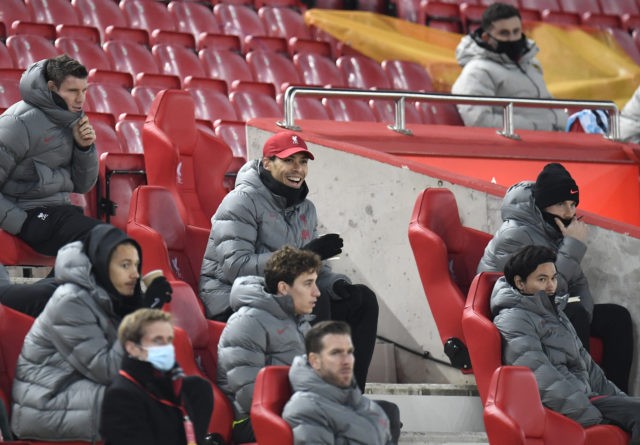 Liverpool midfielder Gini Wijnaldum has revealed that Virgil van Dijk requested him to score against Wolverhampton Wanderers before the match.

The Reds moved to second in the Premier League, joint-top with Tottenham Hotspur and only separated by goal difference, after earning an emphatic 4-0 win over Wolves on Sunday at Anfield.

Wijnaldum kept his promise by scoring on the night and also performed Van Dijk’s signature celebration – putting his hand under his chin and wobbling his fingers.

The 30-year-old explained to the club’s website about the celebration:

“I already said that every goal I score this year I will dedicate to him because we all miss him.

“It was great to have him back. He said to me in the dressing room, “I want to see something today, I want a goal” so I said: “No problem!”.

Mohamed Salah pounced on an error from Conor Coady to score the opening goal in the first half. After the break, the Dutchman curled into the top-right corner from long distance, before Joel Matip’s header and Nelson Semedo’s own goal encapsulated a memorable night for the Reds where 2000 fans returned to Anfield for the first time after 269 days.

Van Dijk – who was watching the game from the stands – is currently out with a devastating knee ligament injury that he picked in October. The Dutch defender is a long-term absentee, but he is recovering well.

Wijnaldum is arguably one of the best players for the Reds this season, alongside Andy Robertson and Salah.

The 30-year-old has been a mainstay in the side, and his energy in the middle of the park has been simply remarkable. It was his 11th consecutive start for club and country, and he is not showing any signs of fatigue. Rather, he has suggested that he is relishing this opportunity to play regularly.

The only problem that remains now is with his contract situation. He has only a few months left in his present deal, and there’s no indication whether he will sign a new contract at the club. Jurgen Klopp, the Reds boss, is hopeful that a solution can be reached quickly.

Liverpool will now face Midtjylland on Wednesday away from home in the Champions League. The Reds have already qualified for the knockout stages so Klopp can rest a number of key players, including Wijnaldum.