Manchester City will face Liverpool at Anfield on Sunday, a match that will have a major say on who wins the Premier League title. 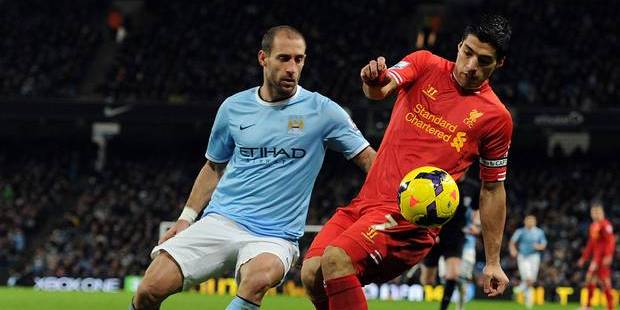 A win would take Liverpool seven points clear of Manchester City, though they have played two games more, while a win for City will make them clear favourites for the title. This could be one of the biggest Premier League games of the decade so here is a combined starting XI featuring the star performers from Liverpool and Manchester City.

It was a difficult choice to make, with Joe Hart and Simon Mignolet doing a decent job for their respective sides.

Mignolet immediately endeared himself to the Anfield faithful after saving Jonathan Walters penalty on the first day of the season, and has since been dependable between the sticks. Joe Hart didn’t start well this season and lost his place to Costel Pantilimon, but after regaining his best form he is back in the side.

Zabaleta is strong defensively and creative in attack, was selected in the PFA Team of the Year last season, and is arguably one of the best right backs in the world. This season, the Argentine has 5 assists to his name, averages 2.72 tackles per game, and has a 84% pass completion rate.

Glen Johnson has been a bit inconsistent for Liverpool this season, but he will take the left back spot in our XI, with the England man performing well there in recent weeks, and has averaged 2.13 tackles per game and an 83% pass completion rate this season.

Vincent Kompany is easily one of the best centre backs in the league. His passion and defensive qualities are well known. The City captain has completed 32 tackles and won 72.73 % of his aerial duelsso far this season.

Martin Skrtel has been a key player for Liverpool this season, completing 30 tackles and winning 68.59 % of aerial duels. Skrtel has also scored six goals, including a brace against Arsenal.

Steven Gerrard would be one of the first names on the list, with the England and Liverpool captain one of the greatest midfielders of the current generation.

Gerrard won the joint EPL Player of the Month for April, and has been brilliant in his new role as a deep-lying midfielder.

Yaya Toure has been one of the most influential players for City, and one of the contenders for Player of the Year award.

Steven Gerrard has won 1.93 tackles per game, and has made several key passes from the back. Yaya Toure averages 1.20 tackles won per game.

David Silva was another easy choice for us to make, with the Spaniard having scored 6 goals, assisted 9, averages 3.09 key passes and 3.5 chances created per game.

There is no better player in the world right now than Luis Suarez, and the stats above just prove that. The Uruguayan has scored 29 goals and assisted 11, tearing defences apart all season with teammate Daniel Sturridge.

Sturridge himself has proved himself as one of the best strikers in the league this season, and has scored 20 goals and assisted 7, while City’s Aguero completes the lineup, coming in with 15 goals and 5 assists.

What do you think? Agree with the lineup? Get involved in the comments below…