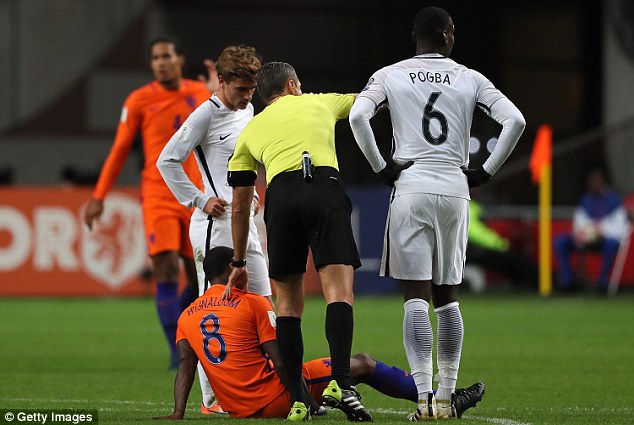 Liverpool have been dealt a major injury blow ahead of their clash with Manchester United on Monday.

Dutch midfielder, Georginio Wijnaldum, picked up a hamstring injury against France on Monday night and could miss Liverpool’s next Premier League game according to Daily Mail.

The Liverpool midfielder limped off just after the hour mark during the 1-0 defeat by France at the Amsterdam Arena. He pulled up and fell to the floor clutching his hamstring after making a run during the World Cup qualifier. The 25-year-old midfielder has impressed with the Reds so far this season and has been a regular starter for Jurgen Klopp.

The former Newcastle United midfielder is now operating in an unfamiliar central midfield role, but his technical ability and intelligence have turned him into a major asset for the Anfield outfit. Alongside Henderson and Lallana, Wijnaldum has been a key part of Liverpool’s midfield since joining from Newcastle for a hefty fee of £25 million.

If the Dutch midfielder fails to recover in time for the United game, German international Emre Can is expected to replace him. The former Leverkusen midfielder has struggled with match fitness so far and has been in and out of the side due to the lack of sharpness. If Can performs like he did last season, Liverpool should be fine. On form, the German is arguably Klopp’s best central midfielder.

Wijnaldum has started all seven Premier League games for Liverpool so far and has played 609 minutes in total. The Dutch midfielder has also picked up two assists in that time. His absence could be a blessing for Mourinho as the Red Devils have struggled against agile players lately.

Wijnaldum’s close control, agility, and quickness could have caused the visitors all kinds of problems.