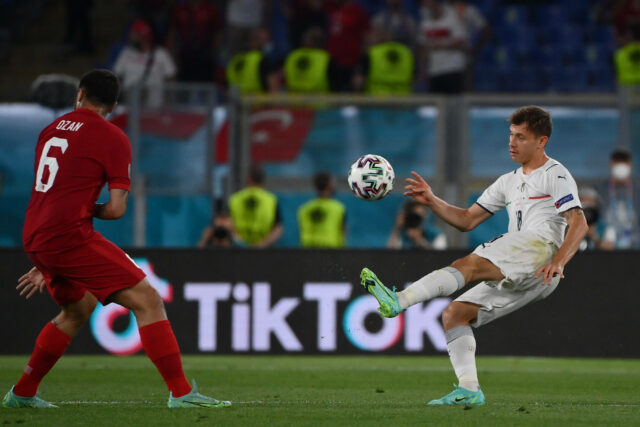 Italy made a brilliant start to their Euro 2020 campaign with an impressive win over Turkey on Friday night.

They kicked off with a 3-0 victory, and some Liverpool fans on Twitter were attracted to the display of Inter Milan’s Nicolo Barella.

Merih Demiral scored an own goal in the second half before Ciro Immobile and Lorenzo Insigne got their names on the scoresheet to earn all three points for Italy.

They face Switzerland and Wales in their remaining group games and look a good bet to progress to the next stage.

However, it was Barella’s performance that impressed everyone. Barella bossed the middle of the park last night, alongside Jorginho and Manuel Locatelli.

Nicolo Barella
One of the most complete midfielders itw imo.He's a perfect Klopp midfielder. Inter will be looking to sell because of their financial problems. Obviously will need sales to afford him
Likelihood 6/10
How much do I want him? 8/10#lfc #ynwa pic.twitter.com/HzaqDW8Stg

Barella did look pretty impressive – yes I'd love him to join #LFC but really he won't – hope I am wrong!#ITA

Not watched much of Barella I’m being real with you all, but I’m watching him closely this euros and so far he looks quality👏🏼might actually be the perfect Gini replacement @LFC

Barella is the one man, @LFC make it happen. Was absolutely everywhere today

The 24-year-old is a massive talent who helped Inter win the Serie A title last season.

Liverpool were linked with a move for the Italy star in April. Calciomercato reported that the Reds and Tottenham Hotspur are keeping tabs on Barella.

Liverpool need to sign a midfielder this summer following the departure of Gini Wijnaldum.

Inter Milan are looking to sell a host of players this summer to balance their books, but there has been no indication that the club are willing to offload Barella.

He has a contract at the club until 2024. Last season he provided 13 assists in all competitions, and his price will go up if he impresses on the international stage.

Barella is an action-packed midfielder and would be a superb signing for either Spurs or Liverpool.

Based on the reactions, many Liverpool fans feel that he would be perfect in Jurgen Klopp’s system.