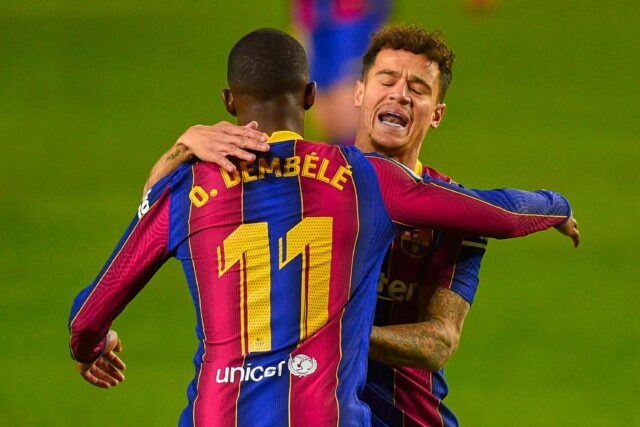 Liverpool arguably sealed the greatest transfer deal of this century when they sold Philippe Coutinho to Barcelona in 2018.

Signed for only £8.5m from Inter Milan in 2013, the gifted Brazilian rose to the stature of cult-hero at Anfield, making over 200 appearances in all competitions.

Like Luis Suarez, when it was Coutinho’s turn to leave Liverpool to join Barcelona, the Reds made sure they made the best possible deal out of him.

According to reports from BBC, Liverpool sold Coutinho in a £142 million deal, one of the most expensive transfers of all time.

Liverpool rebuilt the squad with the money, signed Alisson and Virgil van Dijk, and went on to win the Champions League and the Premier League.

Coutinho failed miserably at Camp Nou, leaving Barcelona begging for clubs to take him off their hands.

The Brazilian has been linked with a move to the Premier League for a while, with Arsenal, Tottenham Hotspur and Manchester United all registering interest at some point.

His journey could now go full circle with Liverpool linked with a move for Coutinho, although this time Barcelona have offered the player to the Reds.

It has been claimed by AS that Barcelona are looking to trim their wage bill this summer, and several big-name players could leave including Jordi Alba, Sergio Busquests and Antoine Griezmann.

The Spanish publication says that Barcelona owe Liverpool a payment in the region of £40m for Coutinho.

Many Liverpool fans want Coutinho back at Anfield. With Xherdan Shaqiri and Divock Origi set to leave, Coutinho would be a handy addition, although doubts remain about whether Jurgen Klopp would take him back.

He is paying the price of ingratitude.
He was rousting in Inter's bench when Liverpool brought him in but he repaid by faking injury just to force a move to FCB.

Bring him back, cuz he's has the quality play which can get through the team's which sit back & defend

Only for less than 30 mil

Coutinho brings back the Fab-4! Go do your magic edwards!