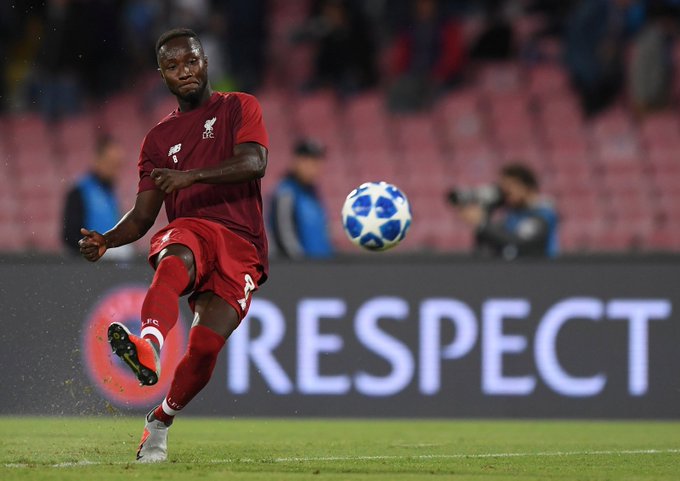 Champions League holders Liverpool moved to the top of Group E after beating Belgian side Genk 2-1 on Tuesday night at Anfield.

Jurgen Klopp’s side lost against Napoli in the opening match of the competition. Since then, the Reds have picked up three straight wins to move towards the knockout stages.

Georginio Wijnaldum scored from close range after Sebastian Dewaest made a mess of clearing James Milner’s low cross to give Liverpool the lead inside 15 minutes.

Liverpool’s defensive problems this season once again were exposed when Tanzanian striker Mbwana Samatta powerfully headed in the equaliser at the near post before the break.

However, the Reds once again found a way to win with Alex Oxlade-Chamberlain scoring a fantastic goal after being teed up by Mohamed Salah.

Many Liverpool fans took to Twitter to express their reaction on Naby Keita’s performance. The 24-year-old, who has struggled with injuries this season, started the game and produced a solid performance.

😎 Naby with another great display. pic.twitter.com/hPlcu49geV

Game died as soon as Keïta and Ox came off, the energy they bring to this team is just so evident.

Also thought Naby Keita was nice and tidy tonight without being spectacular. If people could just enjoy his performances for what they are rather than waxing lyrical when he’s just fine or calling him shit when he’s not AMAZING then we’d soon get on with just enjoying him.

Lively and very accomplished. The most important thing for Naby is minutes pic.twitter.com/Zd1rvqrIrC

Brilliant performance. One of our best players on the pitch. 🇬🇳 pic.twitter.com/B1NLh7EMa5

Both Keita and Alex Oxlade-Chamberlain missed a large chunk of action last season, and they are expected to play a big role for Liverpool this season.

Keita is a fantastic player who adds energy and dynamism in the middle of the park. He brings a lot of quality to the side, and although he is yet to regain his full sharpness, the Guinea midfielder is still capable of producing solid performances like this.