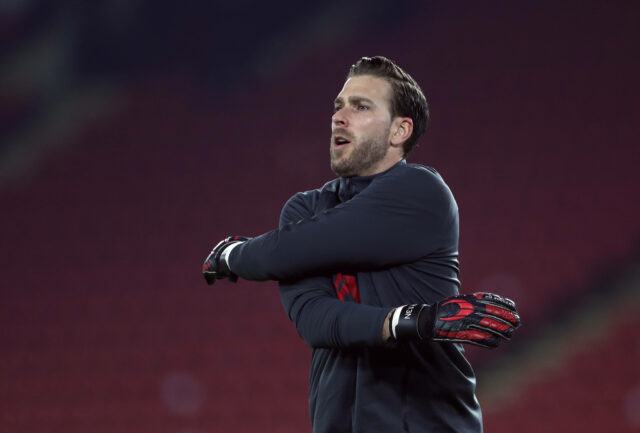 Liverpool confirmed yesterday that goalkeeper Adrian has penned a new deal at the club, and many Reds fans have expressed their views on Twitter.

The Spanish goalkeeper joined the Reds in August 2019 on a free transfer and has served as a back-up for Alisson Becker.

He featured more in the first season in the absence of the Brazilian, but he found game time hard to come by last season.

Adrian has suggested that the club have shown confidence in him and that it’s a pleasure for him to stay at Liverpool, which he considers a “family club”.

The 34-year-old is not a popular figure among the fans, mainly because most feel that he is not really good enough to play for Liverpool.

However, he is vastly experienced, and it seems Jurgen Klopp trusts him.

Here are some of the selected tweets from Liverpool fans.

This decision makes absolutely 0 sense. If we were a serious club, he would’ve been binned just after Atletico game and nobody would’ve heard of him anymore. Fergie ir Prime Mourinho would’ve done this

Came for free. Won us the European Super Cup. Made a few errors like goalkeepers do. Keeping mistakes are obviously more highlighted. Seems like a top lad behind the scenes. Okay with being 3rd choice. And yet the kind of hate he gets from some fans is absolutely insane.

I've no doubts he'll be number 3. That was made clear last season when Kelleher was getting the nod ahead of him.

Shows a worrying lack of ambition. He's a reoccurring accident

Adrian is currently the third-choice goalkeeper at the club behind Caoimhin Kelleher.

The 22-year-old youngster became the club’s back-up goalkeeper over the course of 2020-21. He will sign a new contract in the coming months.

Alisson will also sign a contract extension on improved terms at Anfield after the end of Copa America.

Adrian won the domestic title with Liverpool in his first season at the club, where he made 11 Premier League appearances.

Last season he featured only three times in the Premier League. However, he is a good option to have as a third-choice keeper.