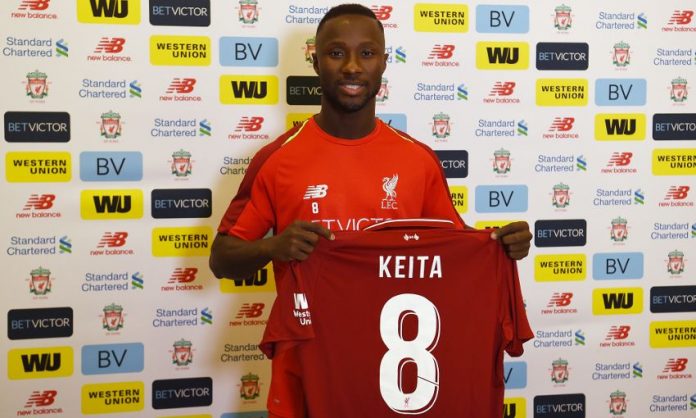 Liverpool have confirmed another signing, with Naby Keita set to join on July 1. The 23-year-old has signed a long-term contract at Anfield and will wear the No.8 shirt, formerly worn by Steven Gerrard. Keita will begin his pre-season for Liverpool on Monday, July 2. He’ll be joined by the rest of the squad who aren’t on international duty at the 2018 World Cup in Russia.

Jurgen Klopp’s men have already added AS Monaco midfielder Fabinho to their ranks ahead of the new season and continue to be linked with Nabil Fekir. The options in the middle of the park are strong, even after losing Emre Can to Juventus, and their attack is arguably the best in the Premier League – Sadio Mane, Roberto Firmino and Mohamed Salah.

Keita will provide steel to the midfield. He’s a combative player who will offer protection to the defence, as well as being able to carry the ball from deep into attacking areas. The Guinean international, who has 29 caps for his country, spent two years at RB Leipzig after joining from RB Salzburg in 2016, racking 71 appearances in all competitions.

Fans will no doubt be excited to see Keita in action during pre-season. Liverpool’s midfield will be very competitive in 2018/19 – Keita, Jordan Henderson, Alex Oxlade-Chamberlain, James Milner, Fabinho and Georginio Wijnaldum.