According to reports in Portuguese newspaper Record,  Liverpool and Chelsea set to battle it out to sign €35m rated Serbian midfielder Lazar Markovic from Benfica. TMW has also relayed the story. 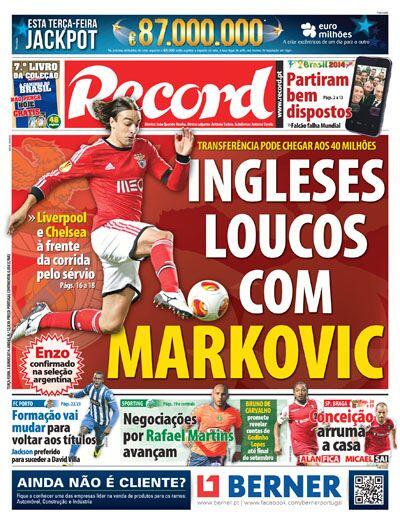 The report claims that both the English clubs are crazy about the 20 year old who has caught the eye with some dazzling performances over the course of the season for Jorge Jesus’ side. The player has scored 6 goals in 39 appearances for the Portuguese Champions .

The Serbian is immensely who thrives in playing at the trequaristra role and is able to play on either flanks as well as a second striker just off the main target man.

Both Liverpool and Chelsea can add an extra dimension in their attack if they snatch the player but any kind of deal will be complicated by the strange nature of Markovic‘s ownership. It is believed that Benfica own 50% rights for the player while a fund owns the remaining 50%.

While Liverpool feature in the Champions League next season, Chelsea also want to add depth to their avalanche of midfield talent at Stamford Bridge in the summer. We had earlier  reported that Brendan Rodgers’ side had been asked to pay €35m to land the player but it would be interesting to see if Chelsea pursue their interest given the Blues are close to snap up former Arsenal captain Cesc Fabregas.