‘Onest ‘Arry Redknapp appears to be feeling the pinch of the credit crunch. Obviously Lord Stevens’ enquiry into bung-taking in football found no evidence he was anything other than an upstanding member of the football community, but in a summer in which Portsmouth’s transfers have been limited, possibly he has struggled with an income below what he is used to.

For whatever reason though, it seems his wife Sandra has been forced to find employment to keep the couple’s caviar stock replenished.

Harry has been talking her up to the Daily Mail, boasting that she would be able to do Phil Scolari’s job at Chelsea. Commenting “my wife could go and buy Kaka,” Redknapp implied all you have to do in football with a multi-billionaire on your side is to write a few cheques, possibly adding “you know what women are like – you send them out for Kaka and they come back with most of Barcelona, a Bayern left-winger and a keeper from Monaco too. She’ll only play them all once, then claim they’re ‘out of fashion’ and bin them. Or sell them to Hull, anyway.”

Harry’s comments are strange, given his attack on Fabio Capello for England’s poor performance in midweek. While he praised the visitors’ defence (“I haven’t seen a Czech that big since I got West Ham to sign all the crap Liverpool players who had my son as their agent….”) he lambasted the team’s woeful play, thereby suggesting there is far more to management than having good players. However, despite this seeming contradiction, he remains certain Mr Abramovich would have done as well to appoint ‘er indoors instead of Mourinho in the first place.

Harry’s claims have not gone unnoticed, with rumours that Liverpool see Mrs Redknapp as their best bet for a credible title challenge. Although initially planning to postpone it until next season, owner George Gillett has apparently been sounding her out about a possible role as assistant manager to help perpetual league failure Rafa Benitez. 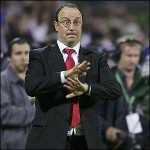 “I like Rafa’s ideas,” said Mr Gillett in an exclusive interview, “but he needs a helping hand, bless him. Who the hell rests Gerrard for an away game at Portsmouth!?”

Given the esteem in which he holds Mrs Redknapp, the move is likely to go though within the next few weeks.

“Ignoring Javier Margas, Marco Boogers, Rigobert Song, Titi Camara and David Nugent, Harry Redknapp has always had an eye for talent. If he says she’s good enough, she could be just what we need. She’ll show Rafa how to spend money, without wasting it on feckless French and Spanish youngsters who aren’t even any good at carrying on the drinks. I mean, Anthony le Tallec!? Why??”

The prospect of a woman in charge at Anfield brings other possibilities as well, not least for the disciplinary side of the club.

“I’d love to see Jamie Carragher sent to his room for bad language,” said Mr Gillett, an ambassador for fair play. “As for this diving business – well, if the lads all came in with mud stains on their shirts, I’m sure there would be hell to pay.”

Sandra Redknapp herself is dubious.

“Yes, I probably could manage Liverpool,” she admitted. “But I don’t know if Red is my colour.”

Harry refused to rate his wife’s skills above his own however, making it clear that without the cash he was the better boss. “I love looking around for loans and free transfers,” he said. “I really enjoy that side of the job, because that is real managing.”

Anyone who saw Portsmouth’s ‘performance’ against Chelsea on Sunday will not be surprised to hear he made no mention of tactical nous, physical preparation or motivational encouragement in his job description.

The Armchair Fan promises to bring you all the stories from the football world which you will have missed in the regular press – check them out at his website. 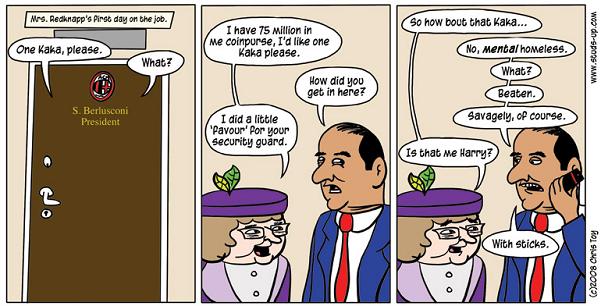