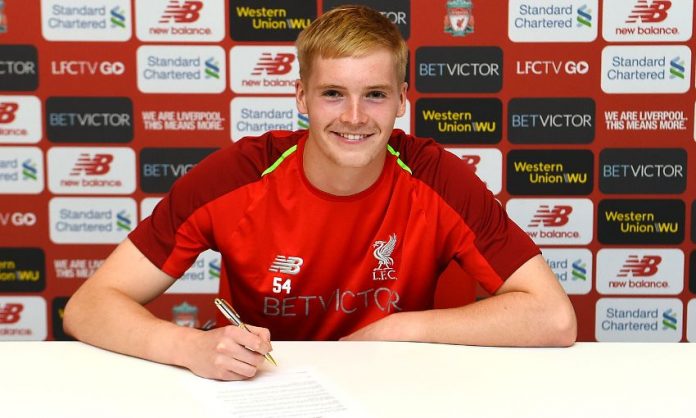 Liverpool confirm they have agreed a new deal for Caoimhin Kelleher. The 19-year-old goalkeeper says he’s been given praise from manager Jurgen Klopp and could have a bright future with the Merseysiders. He said to the club’s official website: “The manager has said I’m doing really well at the moment and to keep going the way I am. The contract is just a sign of how well I’ve been doing.”

Kelleher joined Liverpool from Irish side Ringmahon in 2015 and has risen through the youth ranks to the fringes of the first-team. He’s racked up 17 appearances for the u18s and 12 for the u23s and could be in the first-team this season. With Loris Karius having left to join Besiktas this summer, Klopp may be considering the teenager as his third-choice goalkeeper.

The shot-stopper is behind Alisson Becker and Simon Mignolet in the pecking order, but injury to either one of the players could see Kelleher make the matchday squad. His new deal with Liverpool is certainly confidence-boosting as he knows his development is going in the right direction, so all that’s left is making the transition to the senior squad.

His chance could come in 2018/19. Reports suggest Klopp and his coaching team have been very impressed by his quality at the Liverpool academy, so all bodes well for Kelleher in the future. He’s edged himself ahead of the youth competition and is on the fringes of the senior set-up, which is also why the Reds didn’t opt to sign a replacement for Karius – they trust in Kelleher.