Liverpool skipper Steven Gerrard scored an injury time penalty as the Reds marked their Champions League return with a dramatic 2-1 victory over Ludogorets.

Mario Balotelli broke the deadlock in the 82nd-minute with a clever turn and shot, but the Bulgarian champions immediately responded through substitute Dani Abalo. However, deep in the injury time, Gerrard came to the rescue after Javier Manquillo had been fouled in the box by goalkeeper Milan Borjan. 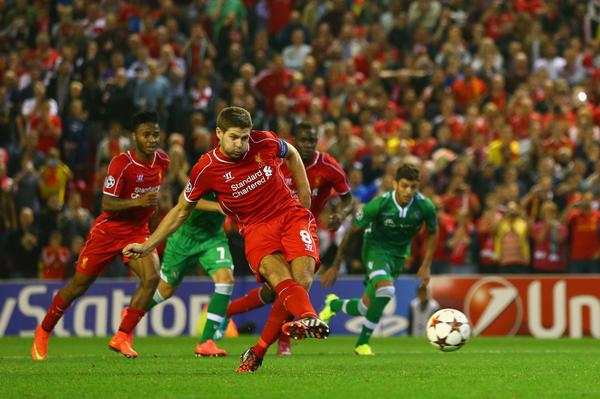 Liverpool had 64% ball possession, 23 shots with 7 on target, yet the Reds were shockingly poor. It can be down to the fact that it was Liverpool’s first Champions League match in five years and nerves could have played a part, especially after failing to make an early breakthrough.

Although Liverpool fans would gladly accept full three points, the Reds were, worryingly, unconvincing yet again. Team selection has come under question while the 4-3-3 system has hardly worked. It was only when Liverpool made those late substitutions and changed into a 4-4-2 diamond shape, they looked comfortable.

Coutinho needs to be dropped

Philippe Coutinho has had cut a sorrow figure for Liverpool yet again – he was poor against Aston Villa as well. The Brazilian has been found guilty of unnecessarily losing possession while he couldn’t influence the game at all with his creativity.

Rodgers must start with Raheem Sterling at no 10, while Coutinho must pave way for Joe Allen in the midfield, once the Welshman returns from injury.

Alberto Moreno has been the best performer of all the newcomers that have arrived this summer for Liverpool. With 90% passing accuracy, 10 crosses and six accurate balls, he was a constant threat from the left hand side. He provided five key passes in the match, more than any other players on the pitch. Defensively, he was solid as well, making three tackles and two brilliant interceptions.

Likewise, young Manquillo, who made eight tackles in the match was one of the best performers for the Reds. Had he been more clinical with his finishing, he could have scored his first goal for Liverpool.

For once, we thought Liverpool would come away with a clean sheet from this match. The visitors had hardly threatened and yet Liverpool managed to concede a goal. And a large chunk of blame should go to the keeper for failing to thwart the danger away.

Mignolet is a good shot stopper, but his positioning, distribution, assertiveness and command over the penalty box are awful. His decision makings are equally poor at times leaving Liverpool defence vulnerable.

Mario Balotelli need to get more in the box

Balotelli impressed heavily with his link up play and work rate. He showed great physical strength while scored a wonderful goal with the outside of his foot. Probably, he needs to get into the box more, but at the same time, he needs help from the other attacking players as well.

“I just feel he needs to be in the box more. Because of his link-up play, he drops in. I said to him at half-time, just make sure when the ball is in wide areas you’re penalty spot in, rather than penalty spot out – he finds himself pulling back outside the box for the cut-back a lot of the time.”