Liverpool Football Club have announced their financial results for the ten-month period of August 1st, 2011 to May 31st, 2012 and the results are highly satisfactory.

According, to Deloitte Football Money League, published in January 2013, the Reds are ninth in the table, with the highest turnover, despite being the only club not featuring in the Champions League.

During this period, that on-field situation hasn’t changed for Liverpool, as the club sits outside Europe’s elite competition once again but according to the reports, issued by the club, there has been an increment in turnover during the equivalent 12-month period due to an increase in domestic fixtures. 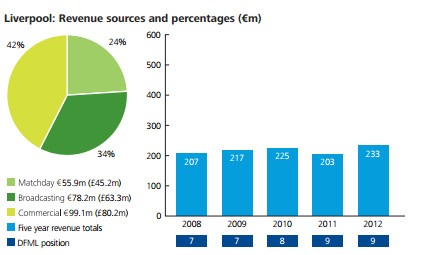 The club’s managing director, Ian Ayre, has particularly mentioned the importance of commercial potential of the club and the aim of recruiting top players with sensible contracts that would provide value to the club.

Under the ownership of Fenway Sports Group, the club’s unaudited turnover has increased by £5 million and Ayre has stressed the role of commercial development and match day revenues for it. He was quoted in the club’s official website:

“If you think of the period that this concerns – in that year we didn’t play in European competition but we had great success in both domestic competitions.

“That made up some of the revenue and, in addition, areas like our commercial partnerships continued to grow, despite a global recession.”

Commercially, Liverpool have tied up partnership deals with leading brands like Warrior, Garuda and Cheverolet that in a way demonstrates the club’s global appeal.

The club has also refinanced its credit facilities, providing £120 million of facilities for three years. The owners have injected £46.8 million into the club via a non-interest bearing inter-company loan that undermines their commitment and support to the club.

Liverpool last year took the decision of staying in Anfield, the club’s spiritual home and Ayre, reflecting on that insisted the club is on course with that redevelopment plans with a £150 million scheme to increase capacity to around 60,000 people.