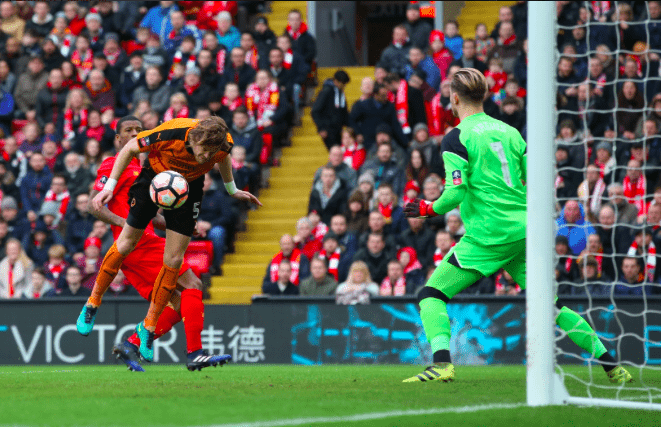 Liverpool lost just two games at Anfield during the whole of 2016. They’ve already lost three in the first month of 2017.

A miserable one-week spell means Liverpool have managed to crash out of both the League Cup and the FA Cup, and from being genuine title challengers, are now 10 points behind league favourites Chelsea, who they face on Tuesday.

Here are three things we learned from Liverpool’s troubled outing against Wolverhampton.

Considering it was the side’s last realistic hope of silverware, Saturday’s FA Cup tie against Wolverhampton Wanderers was significant. Going into the game, Klopp would have known that a Championship team would come to sit deep, and mostly rely on counterattacks for goals.

Liverpool’s shambolic defence and their vulnerability against set pieces were truly on display when allowed their opponents to score a goal in the 51st second of the game. This allowed Paul Lambert’s men to sit back and enjoy the rest of the match watching the home side struggle to break them down.

This is not the first time Liverpool have enjoyed a far greater possession rate but struggled to trouble the opposing goalkeeper. Jurgen Klopp must find a way to amend this. Eventually, it was a set-piece that got Liverpool their (consolation) goal, which seemed almost ironic given their possession rate.

#LFC shambolic. Unbeaten at Anfield for a year, lose 3 at home in 7 days, crashing out of 2 competitions, to Swansea, Southampton & Wolves.

Could Sadio Mané make that much of a difference to the side? Indeed, there is a discernible difference as contestants have found Liverpool easy to play against and have all essentially relied on a similar tactical blueprint, but Klopp cannot ask the opponents to change their approach. Indeed, his own side should do something different. A different set-up or a different personnel needs to be incorporated. With nine changes coming in for this match (and the fringe players and academy starlets getting a go), the Reds still failed to get a positive result. The Merseyside outfit is visibly lacking quality in depth, and it is astounding that they are not going for any winter signings

It is known that winter transfers usually cost a lot more and too often, quality players are not available in January. However, three of Liverpool’s best players in the last five years have been attained in January in Luis Suarez, Daniel Sturridge and Philippe Coutinho. With the squad struggling so badly, Klopp and the rest of the management need to be less stubborn and get a player who could make a difference to the side. With a natural winger missing from the squad, adding someone in that position would allow Roberto Firmino and Adam Lallana to play in their best positions. The duo has struggled to play out wide when being deployed on the flanks.

Even when Mané returns, injuries and suspensions through the remainder of the season may mean players from the starting eleven are missing at some point. Adding to the squad can only make the team more menacing

The Reds are going nowhere with their current defence

A bad defence with full confidence = an average defence.

A bad defence without confidence = a disaster.

Liverpool’s trophy hopes have gone from unlikely to impossible in the last few weeks. Needless to say, the faltering attack is accountable for the same but it is the defence that has cost them routinely, and these games have proved that nothing has changed under the management of the charming Jurgen Klopp. Liverpool have regularly relied on outscoring the opponent (fans of the club will never forget the 2013/14 campaign), but in its absence, the defence must step up, be alert and show character and grit. While Richard Stearman was marginally offside for the first-minute goal, it was the needless foul given away in the first place and subsequently the poor marking that cost Liverpool an early blow. After that, Lambert’s men were happy to sit back and defend. Until Liverpool’s punctured defence doesn’t improve, the Reds cannot be taken seriously.