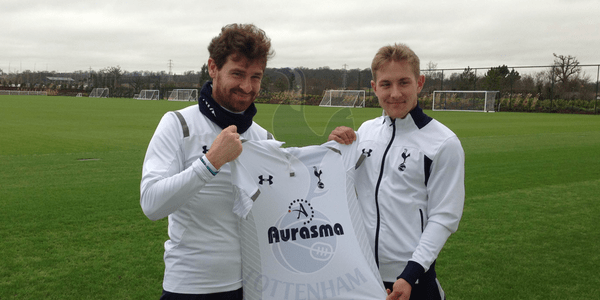 “Every day, once a day, give yourself a present. Don’t plan it, don’t wait for it, just let it happen. Could be a new shirt at the men’s store, a catnap in your office chair, or two cups of good, hot, black coffee.”

Those are the wonderful, wise words of Special Agent Dale Cooper from epochal US drama Twin Peaks.

And they apply to Spurs chairman Daniel Levy and manager Andre Villas-Boas, who having signed a player thinking they’d get him in the summer, will now get him in January for the cost of only £1.5 million, a sum that’s little more than chicken feed to Premiership clubs in the modern game. Tottenham giving itself a present, indeed.

Not only does he come cheaper than items from a Swedish supermarket, but Lewis Holtby is exactly the sort of player clubs of Tottenham’s ilk will be keen to purchase; he’s young, technically gifted, skilful, marketable, handsome and with the now clichéd High Resale Value.

Were a board member of a Premier League club to draw up a specification of the sort of player he’d like to buy (disgracefully few board members in football are female), Lewis Holtby would be it.

What position he’ll play at Spurs is a matter of some conjecture. His natural position is to play as an attacking midfielder, usually behind the striker though occasionally out wide.

The position behind the one main striker has been a problem for Spurs all season, with Clint Dempsey improving but still perhaps lacking the pace and skill to play regularly there and Gylfi Sigurdsson, in a rather quiet way, having a shocker of a season.

The logical solution would seemingly to play Holtby there, solving a weakness and also allowing the new signing to play in his best position.

However, Sandro being out for the rest of the season might change this. He and Dembele were combining with great effect, bludgeoning through teams with sheer power, strength and athleticism. Dembele sashaying forward with Sandro doing more of the dirty work, the consigliere to Dembele’s Vito Corleone in the Spurs midfield, was giving the Spurs team its midfield steel.

Now, Spurs are a player short in that position. Of those players supposed to replace Sandro, Scott Parker is slow, cumbersome and coming off an injury. Tom Huddlestone is slower, even more cumbersome and a bad fit for the intense pressing Villas-Boas asks of his players. Jake Livermore, in name and deed, was average before, is average now and will be average in the future.

Holtby playing there has been mooted, especially as he does have some experience playing there for Schalke 04 amid thoughts he could, like for example Bastian Schweinsteiger, be converted from attacking midfielder to midfield general.

For now though, given his still relative youth and inexperience, it’s likely he will play behind the striker and immediately make Spurs stronger in that position.

Though Spurs fans may wish long and hard for a striker to arrive, what’s been a problem this season has not been so much finishing chances as creating them.

In numerous games, Manchester United and Queens Park Rangers the most recent examples, Spurs had more than enough possession to win the game but simply lacked the guile and creativity to unlock defences and provide top quality service to the strikers.

Even last season, when Spurs had Bale, Modric and van der Vaart in their team, sides which packed the defence and dug deep metaphorical trenches in front of the goal caused far more problems than they should.

And, like Germany, at Spurs he will get plenty of help from players around him, with Gareth Bale having his most productive season yet on the left wing and Aaron Lennon, at last it seems free from niggling injury, enjoying the best year of his career. Under Villas-Boas’s coaching he’s become a far more penetrative player, making much better runs than he did before, now using brain as much as pace to get past defenders.

The true beneficiary of this transfer may well be Jermain Defoe. Emmanuel Adebayor, who would surely have been the consensus first choice centre forward when he signed permanently in August, has so far given the impression his pleasure comes not from playing football in front of packed houses but checking his bank balance at the ATM.

The only he game he applied himself for, he was sent off against Arsenal for a tackle so stupid even Lennie in Of Mice and Men would have considered it beneath his intelligence.

Defoe has been catapulted into a starting role, and already has fourteen goals for the season. This is despite a run of only one goal in his last eight games and often poor all round performances.

Now, with a true attacking midfielder behind him and not a converted one in Dempsey, he’ll hope to thrive on the improved service. Defoe, for all his weaknesses, is a good finisher who, when on form, can be as good a marksman as any.

Holtby could become the power behind his goalscoring throne, the Cardinal Richelieu to Defoe’s Louis XIII, creating the chances that Defoe converts.

Holtby is an excellent signing for Spurs. While he has never played in England before, he has an English father, a captivating German-Scouse accent and grew up supporting Everton, which at least means he’ll have a keen idea of what the Premier League is ‘all about’.

And playing with Germany (along with having Steffen Freund as Assistant Manager), he should have gained some experience of playing a fast paced, high tempo game, which will hopefully stand him in excellent stead.

Putting too many expectations on the shoulders of the young man could suffocate him. He’ll need time to settle in and feel at home. But with his talent, the players around him and Spurs being a side on the up under Villas-Boas, this signing could be one of the best, if not the best Spurs have made in recent times.