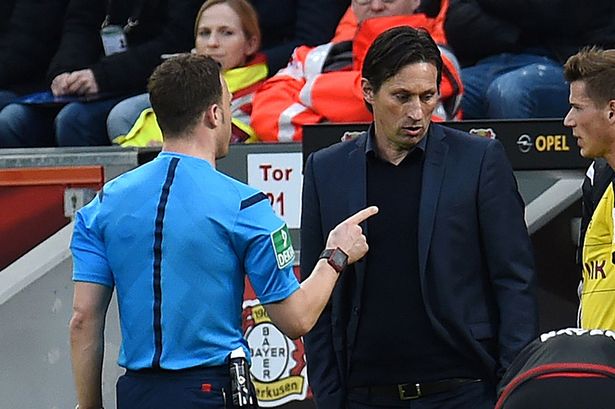 The Bundesliga game between Bayer Leverkusen and Borussia Dortmund was stopped for about nine minuted by referee Felix Zwayer, who walked off the pitch along with his officials.

The incident happened shortly after Dortmund had taken the lead at Bay Arena.

The incident occurred midway through the second half, when the ref gave a free-kick to Dortmund, after Sven Bender was fouled by Leverkusen striker Stefan Kiessling.

Matthias Ginter took the free kick swiftly but some five yards away from the correct spot.

The move ended with a goal for Dortmund, with Pierre-Emerick Aubameyang netting his 31st goal of the season.

The home fans were certainly unhappy, while Bayer manager Roger Schmidt was particularly annoyed with the decision.

He went on arguing with the officials, and vented his fury that the goal has been allowed to stand.

At that point, ref Zwayer pointed him towards the stands, but Schmidt stood his ground. Zwayer instructed skipper Kiessling to tell his coach to head to the stands.

When Schmidt still refused to leave, Zwayer pointed towards the tunnel and took himself and his officials off, leaving both sets of players and the fans flabbergasted.

The match resumed after around nine minutes when Schmidt having been finally convinced to leave the technical area.