It’s the end of the year. A popular time for various press publications to make “Best Of 2007”-type rankings.

Meanwhile newspapers like The Sun, or magazines like FourFourTwo, have been making Top 10 rankings all year long really (see Top 10 EPL Entertainers, Top 100 Footballers, or Richest Players/Club Owners of the EPL, among others).

So, it’s time for French sports newspaper L’Equipe to join the others, and name its All-Star XI Football Players for 2007. Premiership fans will be pleased, because the team is dominated by English-based lads.

In total 7 players from the ‘Top 4’ in England make the list, with only 2 from Spain and 2 from Italy respectively.

Juventus number one Gianluigi Buffon is chosen between the sticks, while the defence is made up of Sevilla’s Daniel Alves, Manchester Utd duo Nemanja Vidic and Patrice Evra, and somewhat surprisingly William Gallas of Arsenal, a player who missed much of last season through injury.

In midfield the English dominance continues with Cesc FÃ bregas, Cristiano Ronaldo and Liverpool symbol Steven Gerrard. There is also a place for European and World Footballer of the Year Kaká. 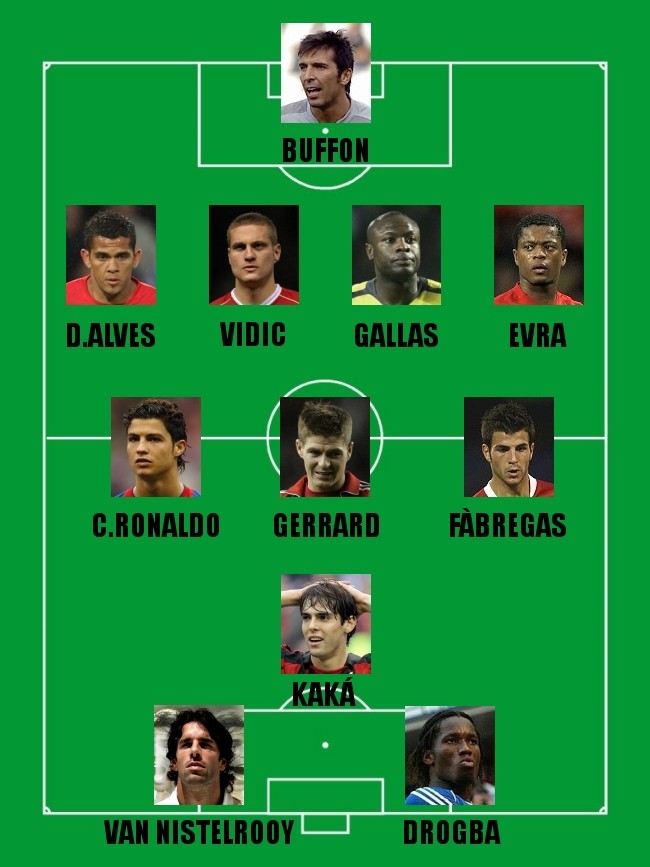 As always, a word of wisdom with such lists should inevitably be that they are highly subjective. In fact, I defy anyone here to agree on all 11 of these choices, but there are certainly a few players cited by L’Ã‰quipe which raise some eyebrows. I’ll get you started with some very pertinent issues raised by Chris, over @ TheOffside.com:

The comments section eagerly awaits your opinions. Fire away!