Arsenal have been linked with a highly talented Leicester City winger Riyad Mahrez this summer.

After a failed attempt to sign Jamie Vardy before the Euros, Wenger is ready to break the bank for his teammate.

The Algerian winger had a spectacular season with the Foxes last year and is a man in demand.

Earlier this summer, there were reports that Arsenal have submitted a big money offer for the Leicester City winger after the Gunners held talks with the player’s representatives.

Now the Algerian newspaper Le Buteur is claiming that Riyad Mahrez has agreed a transfer to Arsenal. Apparently the PFA player of the year has turned down a contract worth 100,000 pounds at Leicester and will join the Gunners. 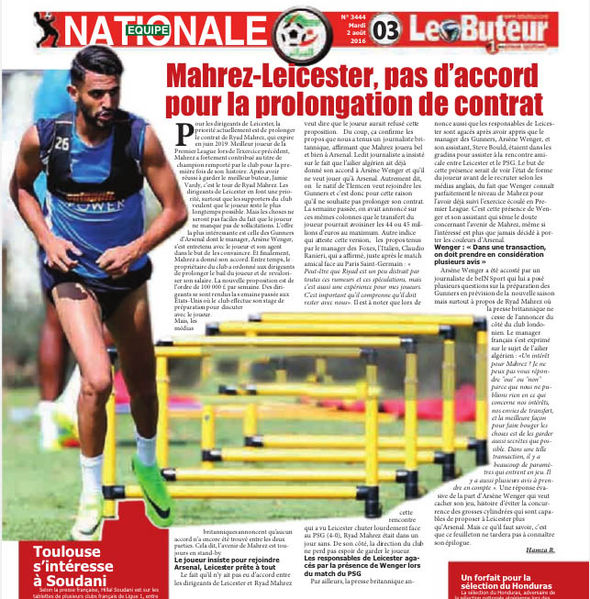 Arsene Wenger was present during Leicester’s friendly with PSG earlier this month and the Arsenal boss managed to convince the player after holding personal talks with him and his agent.

No fee has been mentioned yet, but it is likely that a club of Arsenal’s resources will be able to afford the player if they really want him.

Mahrez picked up 18 goals and 11 assists in 39 appearances for Leicester City last season.

With the likes of Ozil and Sanchez already at the club, Arsenal could have the most fearsome attacking trio in the league if they manage to sign the Algerian this summer. It could well be the defining transfer that takes Arsenal to the next level.

Mahrez was linked with a move to Chelsea as well. At one point it seemed like the player was heading to Stamford Bridge.