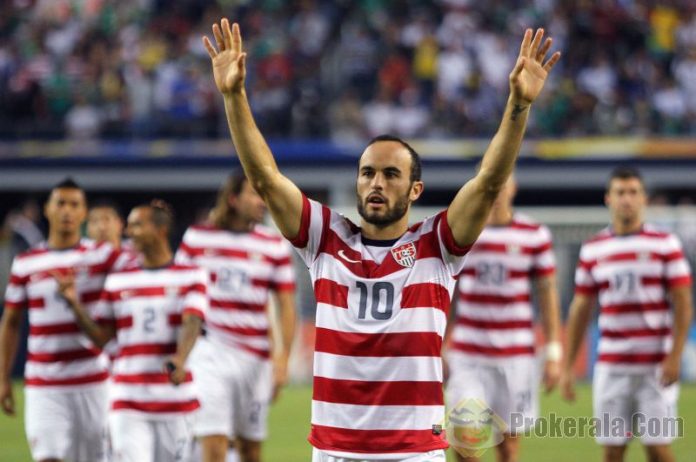 The Southern California native announced on Thursday that he will be leaving the game of soccer permanently.

The Landon Donovan era of soccer that has dazzled and captured the attention of the United States for 14-years will be over at the end of the current MLS season.

“After careful deliberation and after many conversations with those closest to me,” The current leading goal scorer for the United States Men’s National team wrote to the fans on Thursday, in his open letter retirement. “I have decided that this will be my last season as a professional soccer player.”

The 32-year-old creative attacking midfielder/forward has played for the Stars and Stripes from 1998 where he broke into the scene as a youth international for the Under-17 U.S. National team. However, in 2000 at the age of 18, Donovan played his first match for the senior level for the Yanks; fast forward 156-appearances later, he became the all time leading goal scorer with 57 and in assists with 58 for the Red White and Blue.

The three time World Cup veteran also made history by being the only American to score five goals in only 12-World Cup matches. However, when the 19-year-old attacking play maker arrived to Major League Soccer in 2001, where he played for the San Jose Earthquakes till 2005, he then joined the Los Angeles Galaxy. Donovan would win five MLS Cups in the process, and is currently the leading goal scorer for Major League Soccer with 136 goals in 320 games played as of yet.

“I will miss my coaches, at both the club and national team levels, who have helped me develop throughout my career and helped make me the player I am today,” The Ontario, CA native wrote to the fans. “However, after spending half my life as a professional soccer player, I also am excited to begin a new chapter and pursue other opportunities that will challenge me and allow me to grow as a person.”

The USMNT all time assist leader, broke the news the day after he scored the game winning goal against his former club team and current two time defending German champs Bayern Munich in the 2014 AT&T MLS All Star match on Wednesday night in Portland, Ore.

The MLS All Star’s came back and won the match 2-1 against a side that had 10-players that played in the 2014 World Cup; with six of those players playing in the German National team that won the World Cup this summer. Donovan entered the match in the second half, and scored what would be his final goal in his 12-All Star game, and also won the MVP of the All Star match for his second time in his 14-year-career.

However, with the All Star game over, the 32-year-old leading goal for MLS, now only has 15-regular season games left in his career. The former U.S. captain will play seven games on the road, and eight final home games at the StubHub Center, in Carson, CA. Of course if LA makes the playoffs, then his career could be extended till possibly December, if the Galaxy make the final. Which could potentially give the California native his sixth MLS Cup in his 13-years-Major League Soccer career.

“Now it is time to enjoy the rest of the season,” Donovan told members of the press on Thursday afternoon. “There would be no better way, then to go out as a champion, so that is where my focus and my goals are now.”

The 32-year-old U.S. legend will not be lacing up his cleats in 2015 for both club and country anymore, but he urges that he will stay connected and involved in the world of soccer.

“I feel incredibly blessed and lucky to have played a role in the remarkable growth of MLS and US Soccer during my playing career,” Donovan stated in his open letter to the public. “While my career as a player will soon be over, rest assured I will stay connected on many levels to the beautiful game.”

If for some reason the Galaxy do not make the playoffs this year, Donovan final home and away match will be against rivals, the Seattle Sounders FC. He would be facing fellow U.S. internationals Captain Clint Dempsey, DeAndre Yedlin and Brad Evans on Oct. 19 at Carson, CA and on the 25 at Seattle, WA. Both matches will be televised, the first will be on ESPN and last match will be on NBC.