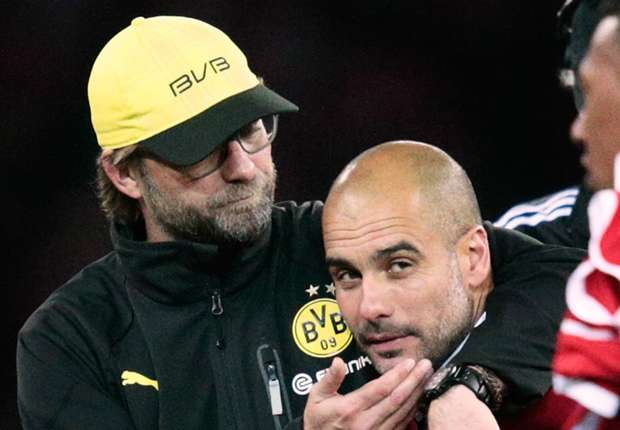 Jurgen Klopp was asked on Saturday what advice he would give to the Bayern Munich manager Pep Guardiola, who is likely to join the Premier League next summer.

For a manager, who has been in charge for little more than three months at Liverpool, and is not completely familiar with the English culture – what valuable advice can he possible give to an experienced manager like Pep?

And yet, Klopp touched on some of the highly debated issues that have plagued the English football for so long.

The Liverpool manager says the only piece of advice he’ll give to Guardiola is to prepare for a draining fixture schedule.

“I don’t have to tell Pep Guardiola anything because he is that experienced. [But] the number of games is the biggest difference,” said the former Borussia Dortmund manager.

Klopp admits he was unaware that the League-cup semi-final was over two legs before he arrived at Liverpool.

“When I came here, I didn’t know there were two rounds in the semi-final of the Capital One Cup. I had people in Germany last week saying: ‘Yeah, you’re in the final again!’ Idiots!”

Liverpool will also play an extra match after drawing with Exeter City in the FA Cup third round tie on Saturday.

“In Germany, when you tell people about the FA Cup that if you draw you play again they say: ‘What?’ Here you have penalties and extra time, but only after the second game. That’s the thing, the number of games – football, football, football. With a perfect pre-season you are prepared for a long, long journey. We knew about it, but to feel it is different.”

Klopp’s intense training methods at Liverpool have been severely criticised by football pundits and some of the former Liverpool players. Since he took charge at Anfield, as many as 12 first team players have suffered injury problems at various points, with majority of them have been victims of ‘hamstring’ injuries.

The problem of playing too many games

This is a serious problem which has been debated over and over, but with no effect. England are the only footballing country in Europe (among top five leagues), where Premier League clubs fight for two major domestic cup competitions – the FA Cup and the League Cup.

While managers tend to give exposures to young players / fringe players in the early stages of the cup competitions, the scenario changes once a club reach the quarter-final / semi-final stages, where top players are being called into action.

The only possible solution to this problem is the big Premier League clubs can make an adjustment by fielding their reserve teams, or U-21 sides, giving the others a fair chance – but it is still an impractical idea and hard to implement it.

While rest of Europe enjoy the festive break from Christmas onwards, in England it is celebrated with a full-throttle football, with the players hardly get any break.

By the time major league actions resume in rest of Europe, in England, the Premier League would have played some 4-5 games more than them.

Many believe that due to this extensive football being played by Premier League / English players, they look jaded and run out of steam towards the later stages of the season or during international tournaments.

Having said that, football during late Dec-and early Jan is a traditional thing in England, and the country want to adhere to its old roots at any cost.

Why there has to be a return fixture?

Liverpool will have to play an extra game at Anfield following their 1-1 draw to Exeter City in the FA Cup 3rd Round. The game could have easily been solved via extra-time or penalty shoot-outs. Klopp has a valid point here.

But, the logic behind it is more financially driven than anything else. Since 2005-06 (considering a significant time span) the so-called big clubs have won the FA Cup or the League Cup – rarely you find a smaller club winning the trophy or reaching the final. The romance of the cup in its truest sense is hardly found.

Wigan won the trophy under Roberto Martinez, but the price they paid for it is huge – they were relegated from the Premier League in 2012-13.

The replay with Exeter may have hurt Liverpool, for they have to focus on other tournaments as well, but financially it means huge to the league two club. Sporting Intelligence notes:

At least, it gives the Exeter fans to visit one of the most iconic stadiums in the world and experience the unique Anfield atmosphere.

Klopp has advised Pep to sign as many as 35 players, so that he can cope up with this rigorous fixture schedule. Clearly, the German has vented his frustrations here, but unfortunately that’s how it works in England – he has little choice left but to adapt quickly to the new system!