As Borussia Dortmund slumped to yet another defeat in the Bundesliga this past weekend, questions have begun to be asked of Jurgen Klopp and his suitability to the job. Sunday’s loss was Der BVB’s eight already this term and leaves the Westphalia outfit propping up the German league table, in spite of the impressive start to their European campaign. An almost polar opposite.  It comes as a sharp fall from grace after the club’s lavish recent domination. So where has it all gone wrong?

It’s no secret that Dortmund have suffered a spate of long-term injuries to not just key players but pivotal ones. The most keenly felt is the absence of captain Mats Hummels after his World Cup-winning exploits this past summer.  Having been linked with a move away from Germany, Hummels has missed the last month with a foot injury in period where Klopp’s side have picked up just four points from twelve. Hummel’s absence has been filled by the relatively green Matthias Ginter who was recruited from Freiburg in July. As yet he has been unable to strike up a partnership with either Neven Subotic or Sokratis.

Hummels absence has compounded by defensive issues brought about by the inconsistencies of both full backs. Lukasz Piszczek has struggled for form since his hip operation in 2013 that saw the right back miss six months of action. On the opposite flank, Marcel Schmelzer has suffered thigh issues and most recently broke a bone in his hand and like his Polish teammate, has yet to get back to his best. Let it not be forgotten both individuals were shining lights in Dortmund’s back-to-back winning Bundesliga championship side between 2010 and 2012.

The lack of form and fitness has been a underlying theme not just in defence but in the offensive areas also. Width has also been an issue. Marco Reus has struggled to stay injury-free since missing out in Brazil and has been in and out of the starting eleven. Jakub Blaszczykowski, like Reus is still recovering from niggling setbacks after missing nearly the entire calendar year with cruciate knee ligament damage. His chemistry with compatriot Piszczek has been missing from Dortmund’s performances domestically, not to mention the winger’s dead-eye from set pieces. 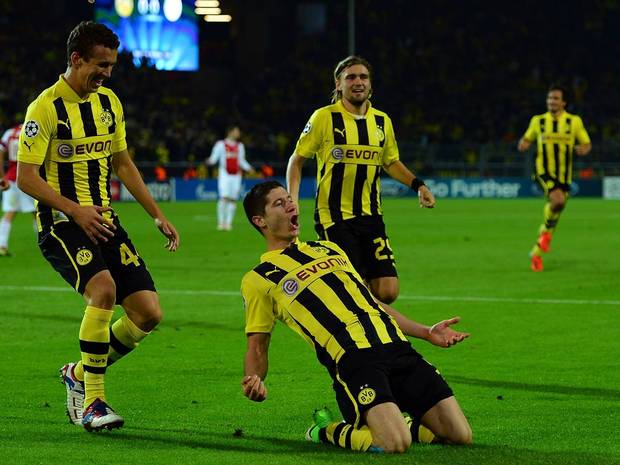 The bigger issue has been the departure of the clinical Robert Lewandowski, and his goals. Whilst Italian forward Ciro Immobile has had a solid start since moving from Torino this past summer, the void of the big Pole’s killer instinct and predatory aerial ability has not been replaced by Immobile, Adrian Ramos nor Pierre Emmerick Aubameyang, despite his electric pace. Mario Gotze has also been greatly missed, despite his also well documented injury woes and Shinji on his return to Germany from Manchester United has barely figured, except from fleeting appearances from the bench.

Essentially, in the space of two years, the jewels of the Dortmund crown have been stolen and what has been left is a rather worn and tired tiara. In all areas of the pitch, through age, injury and general dip in form Klopp’s side has become a shadow of their former selves.

And this the real issue at hand. How can there be such a differential between their form in the Champions League and Bundesliga? Have they been handed a favourable draw? Well arguably yes. Arsenal are defensively off colour, Anderlecht are poor and Galatasaray average – at best. But are things that clear cut? Or is there a more deeper psychological battle for Jurgen Klopp. Having been overtaking and left in their dust by arguably the second best side in Europe (Bayern Munich) is no reason for shame. Dortmund’s reign as double champions doesn’t merely come about through fortune. Perhaps though his time – as with most managers – is winding down. But surely the fall would not occur to such a degree?

Whatever the reasons force such turmoil, Klopp has come out fighting following his team’s plight and insists he will not resign but accepted the blame for his side’s current form. Stating on skysports.com:

“I understand that journalists have those thoughts, but there is no such trend. I see myself as responsible.

“If it is only about luck and a change of coach can bring that, you only have to call me up and I will step aside.

“But it is not so simple. As long as nobody comes and says to me, ‘we have someone who does it better’, then I cannot go.

“I won’t stand in the way, but I cannot go before there is a better solution, the responsibility is great and I can accept it.”

There is no doubt that Klopp can turn around Borussia Dortmund’s fortunes. They have the quality. But after falling from such heady heights, any further step back could perhaps be terminal and indeed signal the end at Signal Iduna Park for the ultimate football hipster.