According to highly respected journalist James Ducker of The Times, Manchester United manager Louis van Gaal is planning radical overhaul of the squad next summer, ready to take his total spending spree to around/over £350m in two years. 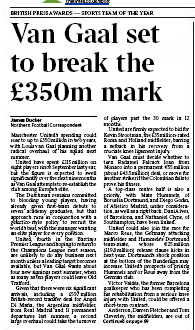 United have spent over £200m in the summer on eight players, and the figure could swell up in the coming nine months.

Blooding youngsters from the academy has been Van Gaal’s one of prime objectives, as the Dutchman having already given first-team debuts to seven academy graduates, but the galactico-style policy adopted by the club means, United are expected to sign at least one world class player in every position.

Ducker makes it very clear that United “are unlikely to do any business next month” unless a major target becomes available. However, seismic shifts on transfer front expected next summer, as Van Gaal will look to sign at least four world class players, when as many as 10 players could leave Old Trafford.

He clearly mentions – “United are firmly expected to bid for Kevin Strootman“ next summer. The highly rated Roma midfielder, who would cost around£35m, has recently returned to full fitness, having missed out a lot of football action due to a cruciate knee ligament injury.

Another important decision Van Gaal needs to make is whether to turn Radamel Falcao’s loan move into a €55m permanent one. The Colombian striker has failed to deliver so far, with injuries playing a part, and depending on his fitness and performance, final decisions will be taken by the club.

In the defence, one or two experienced centre-backs are needed, with the likes of Borussia Dortmund’s Mats Hummels and Atletico Madrid’s Diego Godin being considered. Also, a right back is a priority – Dani Alves, of Barcelona, and Nathaniel Clyne, of Southampton, have also been linked.

Ducker further claims that United could join the race for Dortmund’s Marco Reus whose €25 million (£19.8 million) release clause kicks in next year. Also, former Barcelona goal keeper Victor Valdes could be given a short term contract.

Midfielder trio of Anderson, Darren Fletcher and Tom Cleverley are out of contract next season and will all leave the club. Add to that list Anders Lindegaard, the reserve goalkeeper, and Wilfried Zaha, the winger on loan at Crystal Palace.

Fletcher could be sold to Hull City next month, while Tom Cleverley is likely to join Everton on a free transfer. Ducker claims, Nani who is enjoying a sensational campaign at Portugal, could be sold as well, if United finds a potential buyer. Fringe players Nick Powell and Ángelo Henríquez, both of whom are out on loan, and Jesse Lingard could depart.

Javier Hernandez, who is currently on loan to Real Madrid, is expected to be sold, while Ashley Yound and Rafael da Silva, both have less than 12 months in their contract likely to be chipped out.

Chris Smalling, who is wanted by Arsenal, and Phil Jones are also contracted until June 2016, but while their poor injury records are a growing cause for concern, the England defenders’ futures are likely to be heavily influenced by United’s success in recruiting other centre halves.

Robin van Persie will enter the final 12 months of his contract next summer and the future of the Holland striker — who will be 32 in August — could be affected by what happens with Falcao. If Falcao is not signed permanently, Van Persie seems certain to stay.

Manchester United are pretty relaxed about the future of David de Gea, the Spain goal keeper, who has 18 months left on his contract. The former Atletico goal keeper has been a target of La Liga giants Real Madrid, wants to commit his best years at Old Trafford and is likely to open talks over a lucrative new contract early in the new year.

Ducker didn’t mention a single line of Juan Mata, therefore, we can easily conclude, he is integral to LvG’s plans at Old Trafford.