Manchester United manager David Moyes was subject to a lot of criticism in the summer transfer window. His inability to land any of his marquee transfer targets didn’t go down well at all with the fans. This is more than understandable, considering that after names like Cesc Fabregas and Thiago Alacantara were mentioned, all Moyes could manage was to sign Marouane Fellaini.

One deal though, that didn’t go down as a signing, was keeping Wayne Rooney at the club. After unending speculation of a possible move to Chelsea and even news of the striker handing in a transfer request, he was finally persuaded to stay. And after his stunning performance against Bayer Leverkusen last night that saw him reach 200 goals from the club, it will be safe to say that keeping Wayne Rooney was United’s best deal of the summer.

Why keeping Wayne Rooney was United’s best deal of the summer:

Sir Alex Ferguson signed Rooney from Everton as an 18 year-old from Everton, for a record fee for a player below the age of 20. On his debut, he scored a magnificent hattrick against Fenerbahce in the Champions League. He has never looked back. 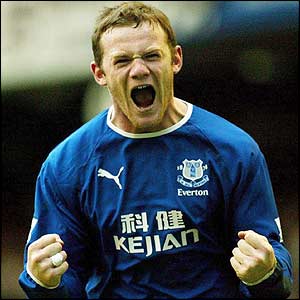 Remember the Name: Wayne Rooney was labelled a future superstar while at Everton

For some rhyme or reason, the Englishman has never been the centre of attention at Old Trafford. He has always been in the shadow of someone else. He played second fiddle in the attacking role to Cristiano Ronaldo until 2009, before Robin Van Persie’s arrival ensured he continued to do so. But yet, keeping  Wayne Rooney at the club is something United have left no stone unturned in trying to do. Keeping Wayne Rooney has been such an important part of United’s plans that they have refuse to listen to any offers coming their way. In 2010, he was on the verge of exiting the club, but the board made him an offer he couldn’t refuse, making him at that time, the highest paid player in the league.

But then again, that is not the only function he can perform on a football pitch. A tireless worker who wears his heart on his sleeve, Rooney can play anywhere his manager wants him to. He can help out with defending, slot in as a central midfielder, play more than ably as a winger and of course, can score goals at regular intervals. No wonder keeping Wayne Rooney at the club is so high on the Red Devils’ priority list.

Howitzer! : Rooney has scored some incredible goals at United, with this astonishing overhead kick against Manchester City topping the list

What keeping Wayne Rooney has allowed United to do this season:

Robin Van Persie is Moyes’ number-one striker. There is no doubt about that. But having your second-choice striker being more than capable of outscoring your number-one is certainly not a bad thing. Danny Welbeck and Javier Hernandez have both been consistently inconsistent, while Rooney delivers every time he plays.

United’s midfield conundrum continues, even with Fellaini now in the side. Rooney has proved in the past to be a useful player in the middle of the park himself, sitting alongside Michael Carrick. The game against Chelsea, the club where he was supposedly moving to in the summer, saw Rooney put in one of his most spirited performances from midfield.  All in all, keeping Wayne Rooney has given the side a lot of flexibility, something every manager loves.
The fans understandably love him, they always have. Keeping Wayne Rooney is what they wanted, and keeping Wayne Rooney is what the club managed to do.
Now, the 27 year-old is playing like a man on a mission. Having joined the 200-goal club, he doesn’t look like he’s going to stop anytime soon.