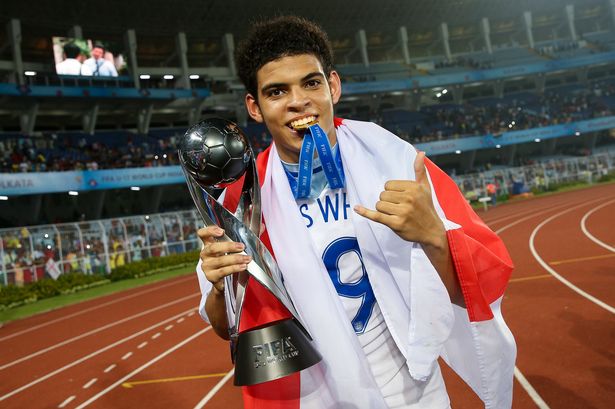 Wolverhampton Wanderers midfielder Morgan Gibbs-White has continued to prove his talent and worth to manager Nuno Espirto Santo every now and then on the pitch despite having just four Premier League starts to his name this term.

The 19-year-old England youth international has featured in 17 other league games off the bench, making two League Cup appearances and three F.A Cup appearances as he looks to break into Wolves’ starting lineup.

Gibbs-White was part of the FIFA U-17 World Cup winning-squad in 2017, and while two of his teammates at the competition – Borussia Dortmund’s Jadon Sancho and Chelsea’s Callum Hudson-Odoi – have already gone ahead to make their debuts for Gareth Southgate’s Three Lions squad, West Ham United vice-chairman Karren Brady believes the Wolves teenager isn’t far behind.

“The future does look rosy for England as we have been winning age-group World Cups recently and had seven players aged 24 and under in the squad for the Wembley game,” she told The Sun.

“While other youngsters such as Marcus Rashford, Luke Shaw, Trent Alexander-Arnold, Ruben-Loftus Cheek, Harry Winks and Joe Gomez would all have featured had they been fit. Blimey, even man of the moment Raheem Sterling is still only 24.

“My spies tell me Wolves teenager Morgan Gibbs-White, who helped England to win the Under-17s World Cup two years ago, won’t be far behind Sancho and Hudson-Odoi.”

Gibbs-White has represented England at under-16, under-17, under-18 and under-19 levels, scoring twice during the U-17 World Cup, and Southgate is surely keeping an eye on him.

While he definitely still has eyes on making the Three Lions squad soon, the teenager will be looking to make the Euros 2019 under-21 squad first after missing out on a first call-up in March.

Manager Aidy Boothroyd has already admitted Gibbs-White is in contention for the Young Lions’ campaign in Italy and San Marino this summer, and it will be great to see him play at the competition.