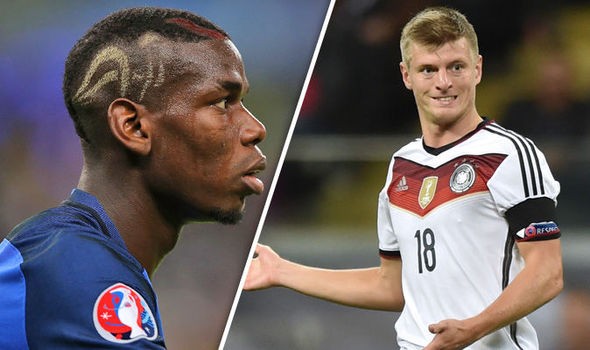 Juventus will insist on including German midfielder Toni Kroos as part of the deal to sell their star midfielder Paul Pogba to Real Madrid.

The Turin club are desperate to keep Pogba for next season in bid to win their sixth-straight league title but are reported to have secretly resigned that the Frenchman will leave the club this summer.

The 23-year-old has been heavily linked with Man United, Barcelona and PSG but Real Madrid remain hopeful of wrapping up a world record deal by next month to lure the dynamic midfielder to the Spanish capital.

It is no secret that only a world record transfer fee will be enough for Juventus to sanction the sell of Pogba this summer and now according to reports in Spain, the Serie A champions want to include Toni Kroos in the blockbuster transfer of the window which will see Pogba heading in the opposite direction.

The German midfielder remains a key player for the 2016 Champions League winner but the Los Blancos will reportedly have to give up the 26-year-old to the Old Lady in bid to sign the former Man United youngster.

The former Bayern Munich star has failed to appear in only eight league matches since moving to Real Madrid two years ago and appears to be in the best form of his career.

Spanish newspaper Marca quote that Juventus have told the La Liga giants that Pogba will cost them 120 million euros as well as Toni Kroos, which will make the French International as the most expensive footballer in the world by a sensational margin.

Meanwhile, AS report that Real Madrid’s general director will meet Pogba’s agent Mino Raiola in Monaco on Tuesday to reach an agreement for the player’s salary.

The Los Blancos are said to have offered €8 million per season contract but the 23-year-old and his agent are looking for a deal close to €12 million per season. However, Real Madrid are not concerned about coming to terms for the midfielder’s salary, which is expected to be agreed rather soon.