According to the Telegraph, Juventus are making a £20million bid to sign Brazilian midfielder Paulinho from Tottenham Hostpur.

The move is expected to open the door for Arturo Vidal to leave the Italian champions albeit Manchester United, who seem the front runners to tie up the Chilean’s signature, dismiss the word that they are close to agreeing a deal for the 27 year old. 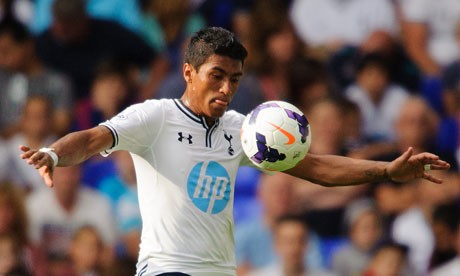 With the Bianconeri confident that the offer for Paulinho will be accepted by Spurs, the approach gives the impression that the Brazilian international is already being lined up as a direct replacement for Vidal.

The former Corinthians star has recently claimed he is happy at the North London club but a switch to Juventus, who are challenging for their fourth successive Serie A title next season and aiming to compete for the Champions League, will prove to be an appealing alternative.

The midfielder arrived at White Hart Lane last summer, being part of the spending spree that took place following Gareth Bale’s record breaking transfer to Real Madrid, only to endure a tough campaign.

Andre Villas Boas, who signed him, was sacked in December. In his successor, Tim Sherwood, a man who questioned Paulinho’s ability, which led to him losing his place in the side.

Sherwood, who was sacked himself at the end of the season, made way for Mauricio Pochettino. The new manager now has to decide whether he wants to keep Paulinho, a box to box midfielder with a clear goalscoring threat, scoring seven goals last season, at the club.

The Red Devil’s have been strongly linked to Vidal, a player who could help rebuild United’s troubles in midfield alongside Spaniard Ander Herrera, who they signed from Bilbao earlier in the window.

Juventus will want above £30million although the Old Trafford club continue to deny a deal is close to being completed. However, he is likely to leave Juve if the club can sign Paulinho.