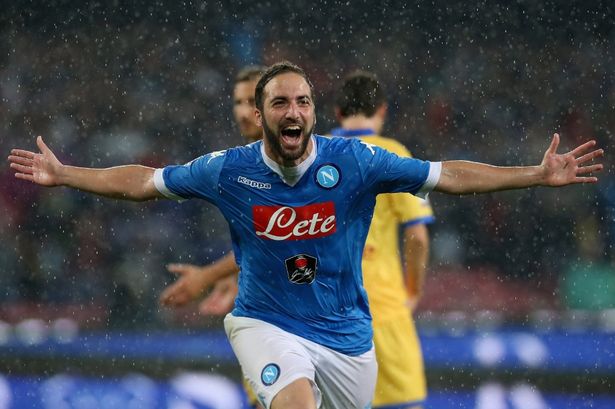 The Argentine striker, who scored 36 league goals last season to equal Gino Rossetti’s 87-year-old record for most goals in an Italian top-flight campaign, was reportedly closing in on a mega-money move to Juventus.

But Napoli insist that the club never entered transfer talks with the Italian champions to discuss the sale of Higuain this summer.

“There was never any contact between Juventus and Napoli for Higuain,” said Aurelio De Laurentiis.

“Marotta (Juventus’ chief executive) confirmed to me today that Juve had no intentions of meeting his buy-out. I asked Marotta if he wanted to discuss the clause, but he assured me that it had not even crossed his mind.”

“No club has made an offer, nor has Higuain told us that he wants to leave,” De Laurentiis added.

“It is time to stop with this whole world of crap and apologise to the supporters who have been left upset by these reports.”

Reports in Italy suggested last week that Juventus have an agreement in place over a proposed four-year deal to sign Higuain, who has a £78.5 million release clause in his contract with the Napoli.

But Juventus have now stated that the 28-year-old will not join the Old Lady since Napoli are unwilling to negotiate the Argentine’s buy-out clause.

“For now the Higuain matter is closed. I can confirm that we will not pay the clause,” said Juventus’ chief exective Giuseppe Marotta.

Premier League giants Arsenal remain interested to sign the former Real Madrid striker to bolster their attacking options, but are unlikely to pay his £78.5 million release clause this summer.