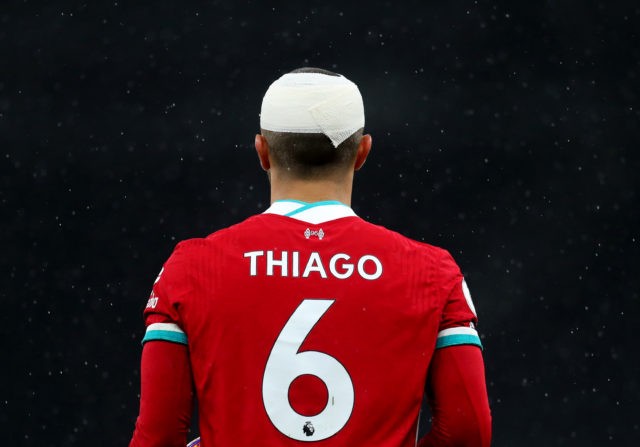 Jurgen Klopp admitted that Thiago Alcantara was not at his best last night against Tottenham Hotspur.

Liverpool returned to form after a run of five league games without a win as they won 3-1 against Spurs in the Premier League.

Goals from Roberto Firmino, Trent Alexander-Arnold and Sadio Mane sealed all three points for the Reds, but it was the manner of the victory that gave an indication that they are very much alive in the title race.

Thiago started the game in a three-man midfield alongside Gini Wijnaldum and James Milner, playing in a slightly advanced position.

The 29-year-old played until the 78th minute before he was replaced by Curtis Jones. The Spaniard attempted 60 passes with 90% accuracy and also made one interception during the game.

Although he did well, Klopp felt the former Bayern Munich midfielder is capable of doing much better than this.

“Today we played a slightly different position, worked together with Millie and Gini on [the] six really well – that was a proper, proper performance,” said Klopp.

“I know Thiago can be much better than tonight, but it was just an important step for all of us. The situation with Thiago was not easy: he came to Liverpool late, then ill, then injured, then playing immediately in a very decisive position.”

Thiago missed a large chunk of the season through injury, and he has recently returned to first-team action, managing five Premier League starts.

He is a world-class midfielder and expectations are very high from him. However, he needs time to settle in at his new club and get into the rhythm of how Liverpool operates under Klopp.

So far, Thiago has shown flashes of brilliance, and he played out some gorgeous passes against Spurs last night.

After a difficult run of results, the Reds seem to have bounced back to winning ways in some style. They have moved into the top four, and need to string together some victories to seriously challenge for the title again.