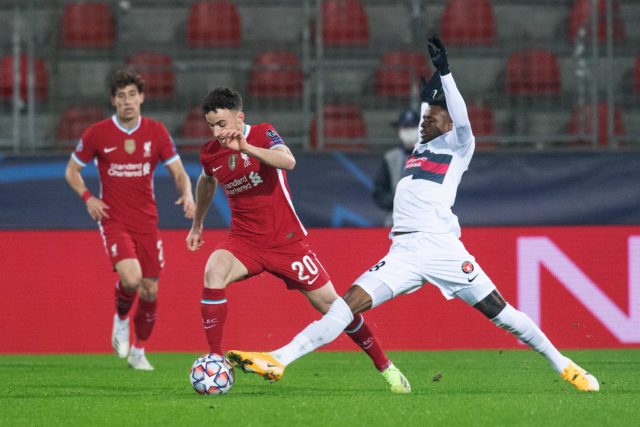 Liverpool failed to move to the top of the Premier League table after just managing a 1-1 draw against Fulham at Craven Cottage on Sunday.

The Reds have now picked up just one win away from home this season, with skipper Jordan Henderson admitting that injuries are disrupting their momentum.

Jurgen Klopp’s side are already without the likes of Virgil van Dijk, Joe Gomez, Thiago Alcantara, James Milner, and Xherdan Shaqiri, and now more players have joined them in the treatment room.

Diogo Jota – the summer signing from Wolverhampton Wanderers – could be out for two months. The Reds boss has confirmed that the Portuguese winger has picked up a knee injury, similar to the one sustained by left-back Kostas Tsimikas while playing against FC Midtjylland in the Champions League.

“It’s worse than we first thought and better than we then thought.

“It was first after the game. We saw the situation when he got it; him himself, nobody would have thought something happened there.

“We got him off the pitch and he said ‘I feel a little bit’ and next day, scans and then a surgeon has to look at it.”

The 24-year-old has been in outstanding form this season, and losing him would be a massive blow for the club, especially during the busy festive time.

With Shaqiri also injured, it remains to be seen whether Takumi Minamino can step up and cement his position in the side.

Tsimikas – who played in the Champions League clash in Denmark – is likely to be out for a while as well. While Andy Robertson remains the first-choice at left-back, Tsimikas’ absence will no doubt weaken the squad.

Joe Matip picked up a back injury during the match against the Cottagers to add further problems for the Reds. However, Klopp is confident that the defender would be fit to play against Tottenham in midweek.

He was taken off at half-time. Henderson partnered Fabinho at the heart of the defence for the second half.

With so many players injured, the Reds could get very busy in the January window. Liverpool will face Spurs next in the top-of-the-table clash in midweek at Anfield.