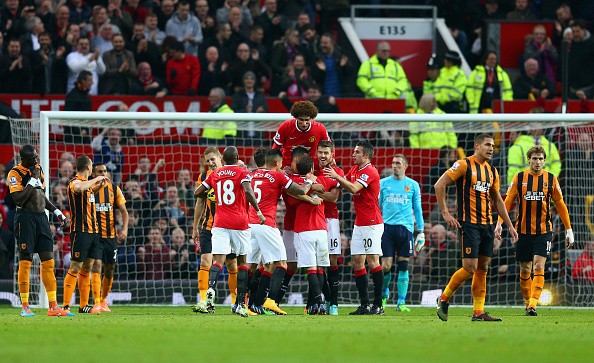 Juan Mata has revealed the mood inside Manchester United’s dressing room is positive after the Red Devils’ convincing 3-0 victory over Hull City.

Louis van Gaal saw his side dominate the game from the first kick and managed to maintain it throughout the game. The Dutchman said it was the best game of the season for the Red Devils.

Chris Smalling opened the scoring before Wayne Rooney scored his second in two matches. It was made even better when Robin van Persie  managed to get his name on the scoresheet against Hull.

The former Chelsea midfielder started after spending most of the previous match on the bench. The victory over the Tigers was United’s third straight win and Mata is hopeful that his side can maintain those results in the upcoming fixtures.

“After the game, in the dressing room, the feeling was that we had played a good game to be proud of, because it had showed all our efforts in the training sessions during the week,” Mata wrote in his weekly blog.

“This win adds up to a good run of results. Let’s hope to consolidate that in December, a very busy month that can take us closer to our goals. For a start, we play Stoke City this Tuesday, again at home.

“On Saturday we won the first of two consecutive games in Old Trafford in just four days. The team had a solid performance with spells of very good football. Personally, I enjoyed myself a lot on the pitch.

“We were better than Hull since the beginning, with several chances to score and a high percentage of ball possession that we used to play some nice football that I think our fans did like. That is the way to go! With the players we have I believe we are capable of playing football that is good and effective at the same time.”

The only down side for United from Hull fixture is that their record-signing Angel Di Maria was forced to withdraw after sustaining a hamstring injury. Van Gaal confirmed the former Real Madrid star will miss United’s next league fixture against Stoke City on Tuesday.

Mata had some kind words for Di Maria. He said, “Ángel’s injury is a pity; we hope he gets fit again soon. As for Wayne’s problems, hopefully it’s nothing too serious. In this regard, we keep being really unfortunate with so many injuries.”