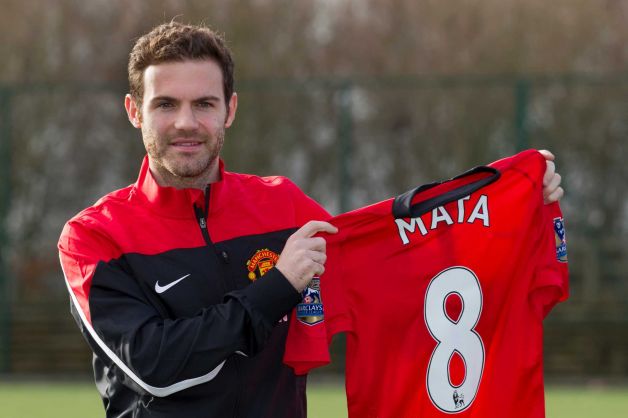 Those old enough to remember the days before the Premier League will recall when teams took to the field wearing 1 to 11. not only that, but the goalkeeper always wore 1, the centre forward number 9, and the right and left wingers 7 and 11  respectively. The commercial imperative to sell shirts however has changed all of that, and numbers are now merely extensions of the players names – CR7 for Ronaldo for example – more than indicators of where someone will be playing.

With this in mind, there was a lot of ‘false news’ on various social media yesterday that Juan Mata had chosen the iconic 7 shirt to wear at new club, Manchester United. The rumours were false however, but the duplicity certainly fooled one of my regular sources of news from Old Trafford and meant that I too fell into the trap. Mata in fact eschewed the number 7, and instead will wear 8. This means that the famous 7 shirt remains empty.

There is now a mystique growing up that taking the number made famous by the likes of George Best, Bryan Robson, Eric Cantona, David Beckham and Cristiano Ronaldo amongst others is a bit of a poisoned chalice wherein anyone taking it up is inviting unfavourable comparisons with legends of the past. It’s been reported that a previous incumbent, Antonio Valencia, gave up the shirt for a more inauspicious number to avoid the pressure.   Michael Owen is another player who enjoyed less than an ecstatic times wearing 7. The point surely is though that the number is only a slice of cloth, or printing,  attached to the outside of the shirt. The key factor in determining the success of a player wearing number 7 – or any other number for that matter – is surely the person inside the shirt, not the number on the back of it.

With Mata taking over the number 8 at Old Trafford, he’ll be on pretty safe ground in being compared to Anderson, but some day United will need to give the iconic number to a player. Personally, come next season, unless there’s a world star brought in, I can see it going to Januzaj. If there’s an heir to the United legends of old, this could the guy.

For more from All blue Daze: