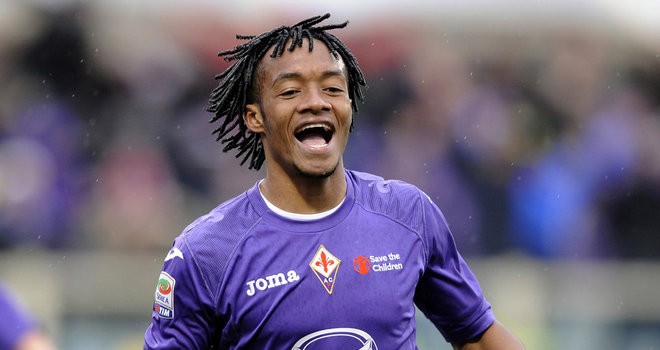 It’s all done and dusted. Colombian winger Juan Cuadrado has said goodbye to his Fiorentina team-mates and will travel to London to complete his medical today.

Fiorentina manager Vincenzo Montella has confirmed the South American will join the west London club, in a part of the deal that will see Mohamed Salah moving the other way on loan.

“It was a sale that had to be done. The club has done the right thing because we are also getting a very good player,” Montella said, as quoted by Sky Sports.

“Naturally, we need to understand how long Salah will need to adapt to our football as it’s different from the English and Swiss leagues.”

“From a defensive standpoint, Cuadrado guarantees us a lot more than Salah. Cuadrado is a player that has always arrived with a smile and given everything to Fiorentina.”

According to Di Marzio, Cuadrado will be give #74 shirt at Chelsea. Cuadrado’s favourite number is 11, but at the moment club legend Didier Drogba wears it, so he wants a number that adds up to 11.

Juan Cuadrado has decided to wear number 74 since the two numbers add up to 11 which is his favorite number. #CFC pic.twitter.com/1MtoyIxLf7