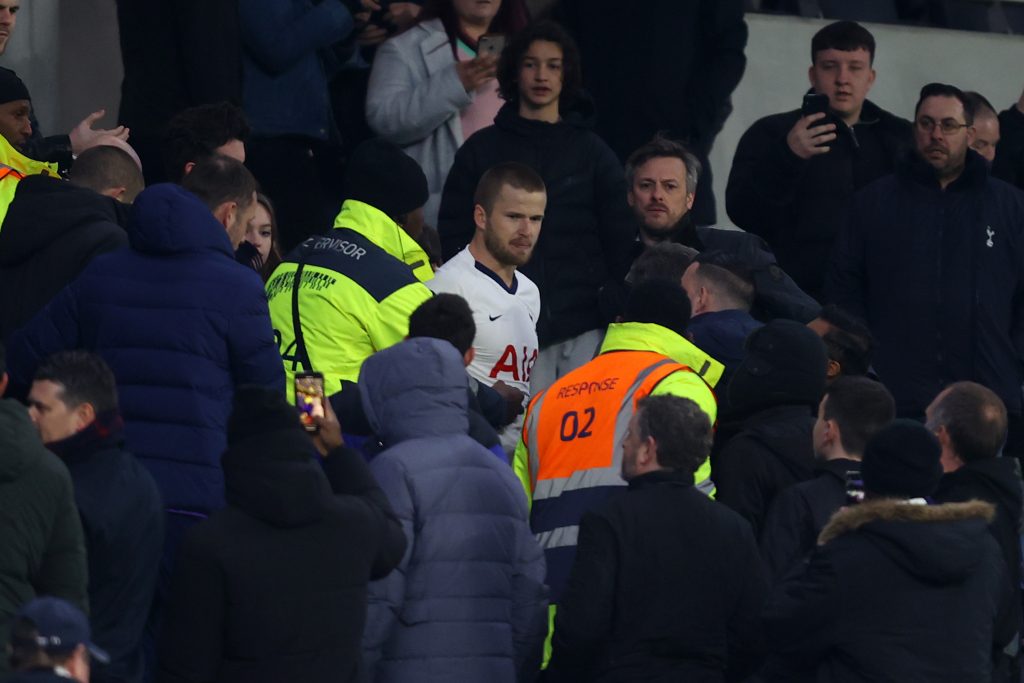 Tottenham Hotspur midfielder Eric Dier was involved in an altercation with a fan in the stands last night after his side crashed out of the F.A Cup’s fifth round at the hands of Norwich City.

The England international ran into the stands after the game, climbing over seats behind the dugout to confront a fan who reportedly insulted him in front of his brother in the players’ friends and family section.

Dier had to be restrained by supporters and stewards as he attempted to defend his brother, and he now faces an F.A investigation.

Tottenham are looking into the situation as they try to identify the fan that sparked the ugly scenes, and boss Jose Mourinho has leapt to the defence of the midfielder, claiming he won’t agree if the club decide to punish him even though he did wrong.

“If the club discipline Eric Dier I would not agree with it, but what he did was wrong,” the Portuguese said post-game.

“This person insulted Eric, the younger brother was not happy with the situation and Eric was not happy. We as professionals cannot do what he did.

“I repeat we professionals cannot do it, but I repeat I am with the player and I understand the player. The fans were with the team until the last penalty kick that we missed.”

Jose 🗣"If the club does that, I will not agree." pic.twitter.com/OYE6uagfKj

Dier played at centre-back again last night, putting in an impressive shift against Norwich. The match ended in 1-1 after 120 minutes, but the visitors ran out 3-2 winners during the penalty shootout.

While Dier converted his, it wasn’t enough as Tim Krul saved three others, dealing a massive blow on Spurs’ chances of ending the season with silverware.

Tempers boiled over post-game, and the Tottenham star could soon find himself in disciplinary hot-water from the FA even if the club opt not to punish him, and it will be interesting to see how Mourinho reacts to their decision.