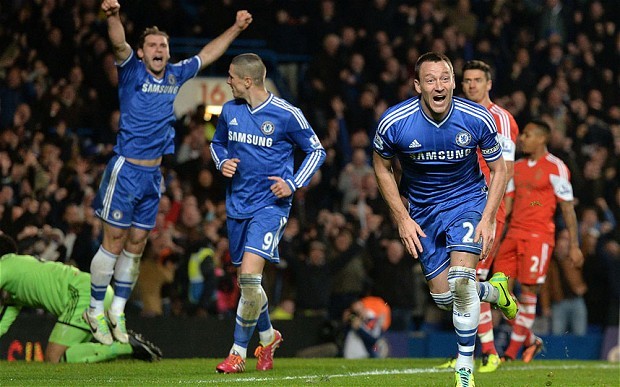 The former England international has less than six months in his contract and scored the opening goal in the Blues’ 2-0 Capital One Cup final victory over Tottenham Hotspur. The centre-back was one of the standout players for the Premier League leaders on Sunday.

Terry has been very impressive form for Chelsea and the former Real Madrid manager confirmed that his captain will not face the same fate as Frank Lampard. The midfielder left Stamford Bridge as a free agent and is currently on-loan at Manchester City via New York City FC.

“Every one of these big guys are difficult to replace but, at the same time, you still have the player and he is still an important player but you have to start thinking what next. That is the best way to do things.

“Sometimes you have the solution around the corner and sometimes you have to look outside your club but this is a process [on which] we can take our time because John is proving again this season that he is a player for years.

“Before the end of the season [it will be sorted] for sure but what I can guarantee is he will be a Chelsea player next season because I know what my board tells me and the player tells me so no doubt he is going to get his contract,” Chelsea manager stressed.

The Portuguese tactician’s comments will come as a reason to cheer for Chelsea supporters, who are enjoying a great time as the Blues won the Capital One Cup and sit on top of the league table.