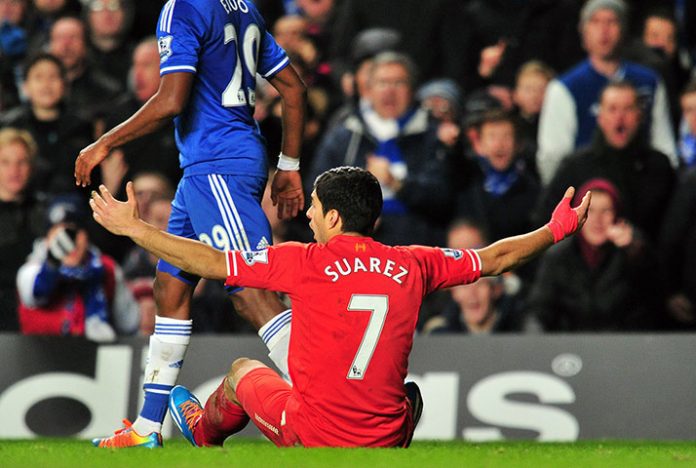 Chelsea consolidated their third position in the Premier League, after the Blues earned an emphatic 2-1 victory over rivals Liverpool at the Stamford Bridge on Sunday.

Blues manager Jose Mourinho was quick to criticize Liverpool striker Luis Suarez and accused him of diving. There were at least two incidents where the verdict didn’t go in favour of Suarez, but Mourinho feels the Uruguayan tried to con the referee instead.

In the second half, striker Samuel Eto’o tackled Suarez from behind, which referee Howard Webb failed to spot. Obviously, Mourinho, defending his own player, feels it was not at all a penalty and further Suarez should have been booked for diving offence.

“It is not a tackle. Suarez lost the duel with Azpilicueta, who has the ball and is leaving the box,” said Mourinho as quoted by BBC.

“Now he is doing an acrobatic swimming pool jump to try to get a penalty.”

He added: “He is so clever because he also knows he is in the area with the Liverpool supporters behind him.

“But [referee Howard] Webb is 10 metres away and I think the only mistake he did was not to give him a yellow card.”

Liverpool manager Brendan Rodgers was smart too avoid any further controversy but said Samuel Eto’o should have been sent off at the first place for his reckless challenge on Jordan Henderson in the opening few minutes of the match.

Rodgers feels that Suarez provokes challenge from the defender, simply because he is world class, but a challenge from behind, from a player who is not involved in the contact was unexpected.