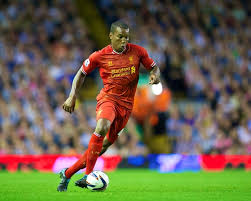 During Liverpool’s 1 – 0 win against Manchester United, Glen Johnson had to go off with an injured ankle. It is uncertain how long he will be out for, but reports are saying that it could be up to ten weeks. Andre Wisdom came on to replace the right back for the rest of the game.

Glen Johnson is a key player for this Liverpool side, an experienced head among a lot of youth. He is arguably one of the best fullbacks in the game right now. His impact going forward, providing width for his side is immense, while defensively he can shut down some of the best wingers. Over the last couple of years Liverpool have seen Johnson do extremely well, but he is peaking and will not be able to play forever. At the age of 29, he is approaching his thirties and the backend of his career. Brendan Rodgers will be looking to the future and trying to sort out his future right back.

Martin Kelly and Andre Wisdom are both competent at right back and also play centrally. They are young at the ages of 23 and 20 and have big futures ahead of them. Wisdom was Johnson’s replacement in the last game and would be expected to cover for Johnson while he is injured. Last season he was very impressive when he played for the first team. Martin Kelly was injured for most of last season, but in previous seasons he has shown that he is competent when playing at first team level.

With the injury to Glen Johnson, either Andre Wisdom or Martin Kelly will get a chance to play and develop. Playing at first team level regularly is the next step for both of these young, talented players and every chance they get, is another chance to develop and grow. Glen Johnson’s injury opens the door for them to do so and could be beneficial in the longer term.