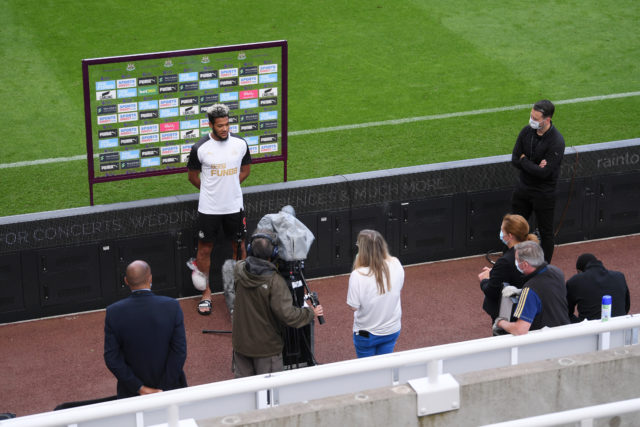 Joelinton joined Newcastle United in the summer transfer window for a club-record fee of £40m. He was a key player at Hoffenheim and everyone at Newcastle expected him to shine at Tyneside.

However, it turned out to be a frustrating spell for him. The Brazilian managed just one goal in the Premier League prior to Newcastle’s 3-0 win against Sheffield United on Sunday.

The 23-year-old got his name on the scoresheet and ended his long wait for another Premier League goal. Newcastle fans will hope that he can keep on scoring and build his confidence till the end of the season.

Liverpool legend John Barnes has spoken highly of Joelinton. The popular football pundit has stated that Joelinton has not been receiving the credit that he deserves this season.

Joelinton missed a glorious opportunity in the first period, but Barnes believes the young striker brings a lot more to the game. He has even compared him with Everton striker Dominic Calvert-Lewin.

“I think Joelinton is similar to [Everton striker] Dominic Calvert-Lewin because every time I see him play, he’s working really hard, holding the ball up,” said Barnes.

“He’s not scoring goals but [he’s] not really getting the credit he deserves because he’s doing so much for the team. I’m pleased he’s got that goal because he did come with a big reputation.”

Calvert-Lewin has been simply outstanding this season for Everton. After struggling to make an impact under Marco Silva, the youngster has taken his game to a whole new level under Carlo Ancelotti.

The 23-year-old has scored 13 goals in the Premier League for the Toffees.

Joelinton works hard, but he was lacking in confidence. The goal will do a world of good for him. If he can score on a regular basis till the end of the season, Newcastle can dream of a top-ten finish.