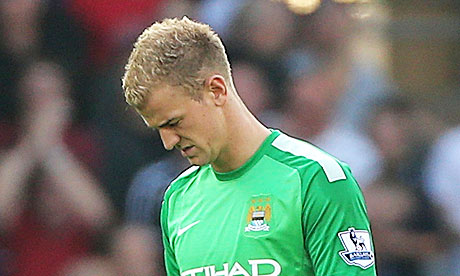 Goalkeeper Joe Hart has admitted that he is finding it hard to accept that he will not be part of the England squad which will play in the World Cup this summer.

Hart has served as first-choice for the Three Lions at every major tournament since Euro 2012 and with 75 international caps to his name, he is the most experienced keeper that Gareth Southgate had available for selection.

Following the poor performances of the 31-year-old for West Ham this season, it was still expected that Southgate would select him as the third-choice behind Jordan Pickford and Jack Butland. The England manager however instead opted to select Nike Pope of Burnley. The number one jersey is now likely to be a battle between Butland and Pickford.

Based on merit, Pope deserved his selection and was one of the best keepers in the Premier League this season.

Hart was not even named on the standby list for a call-up in the case that one of the three keepers is injured. Instead, Southgate opted to place Tom Heaton on standby. Hart and Jack Wilshere were arguably the two most high-profile players that were snubbed by Southgate.

Hart has since taken to Instagram to admit that he is disappointed by the situation.

He said:  “Not going to lie, I’m gutted. After 2 years of trying to make the most of a really tough situation, this is hard to take.

“I’m proud to have put in the graft and play every minute to qualify with the team and have a really important input in that outcome. I know what I bring to the team, but it is what it is.

“Good luck to the team out there, the players know that even though I won’t be there, I will have my England shirt on as a fan this time and supporting all the way.”