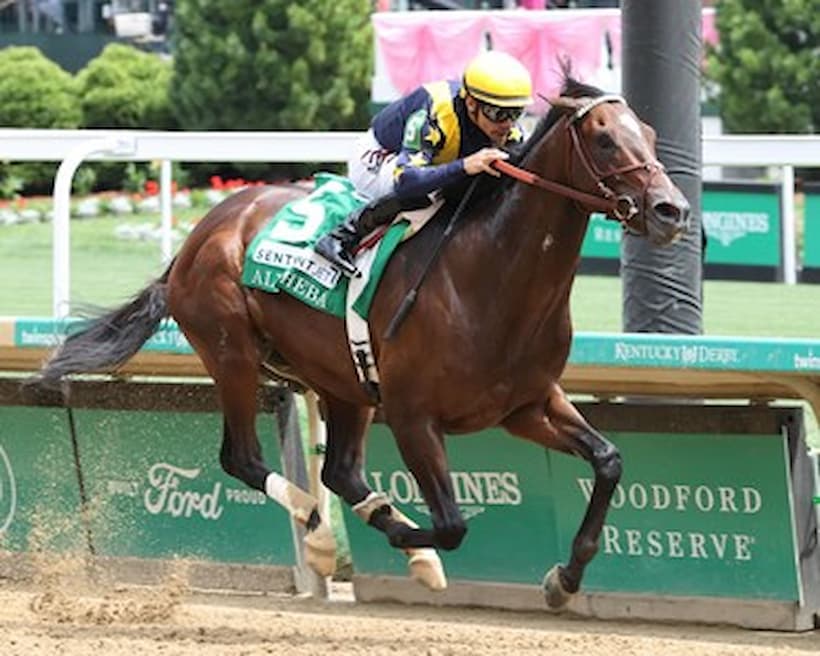 Saturday’s Jockey Club Gold Cup 2022 will see a strong field of eight runners battle it out for the lucrative $1.25m purse at Saratoga, while there is also an added carrot for connections with this being a ‘win and you’re in’ Breeders’ Cup race – meaning the winner will book their place at Keeneland on Nov 5.

It’s a race the Shug McGaughey barn have landed five times in the past and will be trying to add to that with First Captain, but all eyes will be on prolific scorer Olympiad who will be hoping to bounce back after flopping in the Whitney Stakes on Aug 6 recently.

Olympiad Can Return To Winning Ways

The mighty Cigar took this race back in 1995 to give trainer Bill Mott his first Jockey Club Gold Cup and he’s since added successes in 2012 (Flat Out) and Ron The Greek (2013).

As we can see from that last race, Olympiad was ridden a bit off the pace that day and found it hard to peg back the ones in front of him. Once beaten he wasn’t give a hard time by jockey Junior Alvarado and having had 28 days to recover from that run is taken to bounce back.

Before that last run he’d risen up the ranks with four wins in the spin that included the Grade Two Stephen Foster Stakes at Churchill Downs on July 2. He had another of today’s runners – Americanrevolution – 2 1/4 lengths can in third that day too and we can expect this 4 year-old colt to be ridden a lot closer to the pace this time.

BACK OLYMPIAD for Saturday’s Grade 1 Jockey Club Gold Cup with BOVADA and receive a 100% welcome bonus (up to $1,000) to use on the race.

All odds correct as of 02:24 on Sat 3 Sept and subject to change

Veteran trainer Shug McGaughey has the best record in the race of the yards on show here – with four previous successes in the Jockey Club Gold Cup.

The first of those came way back in 1985 with the Pat Day-ridden Vanlandingham and he went onto add wins in 1989 (Easy Goer) and 1993 (Miner’s Mark). The most recent win for Shug came in 2019 when John Velazquez won the race on Code Of Honor for him after the stewards reversed the placings with Vino Rosso, who originally crossed the line in front.

Who Are The Dangers To Olympiad?

The Todd Pletcher yard are mob-handed with 50% of the 8 runners – Untreated, Americanrevolution, Keepmeinmind and Dynamic One.

You can make a case for them all too. Americanrevolution was last seen running 2 1/2 lengths behind Olympiad in the Stephen Foster Stakes on July 2 and before that was 3 lengths behind Dynamic One in the Listed Blame Stakes on June 4. With that in mind, he’s got a bit to find on this pair

DID YOU KNOW? The last 8 Jockey Club Gold Cup winners were aged 5 or younger

Dynamic One got the better (just, nose) in a sustained battle with First Captain in the Suburban Stakes at Belmont Park last time and even though the pair have had 56 days to recover you just wonder if that would have left it’s mark (watch below).

Untreated was only 3/4 of a length adrift of Dynamic One in the Suburban Stakes last time too, so is closely linked in too, but KEEPMEINMIND, who was 6th in the Kentucky Derby back in May, was impressive in winning at the track last time out, albeit in an Allowance Race.

That was only his first start for Pletcher too after coming from the Robertino Diodoro stable in the summer. Prior to that last run the colt had shown good form last season in running 4th in the Grade 1 2021 Travers Stakes here at Saratoga and before that a close second to Essential Quality in the 2021 Jim Dandy Stakes, also at ‘Toga’ (watch below).

BACK KEEPMEINMIND for Saturday’s Grade 1 Jockey Club Gold Cup with BOVADA and receive a 100% welcome bonus (up to $1,000) to use on the race.

Fourth in the 2019 Belmont Stakes. Lightly-raced for his age after having a few injuries in the past. Does like it at Saratoga though – won the 2019 Jim Dandy Stakes here and likes to race up with the speed so we can expect more of that on Saturday. Last run was also a winning one when taking the Battery Stakes at Delaware Park on July 9, but only had two to beat that day. Another that would be a shock winner, but won’t be without his supporters for the exacta or trifecta

The one the main focus will be on ahead of Saturday’s race. A winner of 7 of his 11 starts so a highly talented colt, but does need to bounce back from a poor run last time in the Whitney Stakes on Aug 6, when 4th of five behind Life Is Good. Prior to that flop he’d won four on the bounce and is likely to be ridden closer to the pace this time – something he’s done when winning his races. Trainer Bill Mott has three wins in this race to his name that include the classy Cigar in 1995, plus back-to-back wins in 2012 (Flat Out) and 2013 (Ron The Greek)

The final of the Todd Pletcher runners and having only raced 9 times can be expected to have more improvement than most. Has form that is closely linked in with Olympiad, First Captain and Dynamic One, but despite running well again that trio this season has been beaten by them all. Some feel he’s in the race to set things up for the other Pletcher runners, but his form suggests he’s not without a chance of staying in the shake-up till late on and, therefore, exacta or trifecta players might latch onto this.

One of the more experienced in the field with 34 career runs and was fifth in this race last year (beaten 7 lengths), but since 2000 we’ve only had two winning 6 year-olds of this race. Likely outsider that has recorded all five of his wins at Fair Grounds, but was also well behind Olympiad last time in the New Orleans Classic Stakes on March 26.

One of four in the race for trainer Todd Pletcher, who won this prize in 2020. This 4 year-old has won more than $1m in winning five of his 9 races to date. Held and entry in the Whitney Stakes at Saratoga earlier this season with this race the preferred target over the longer trip. Certainly no back number but does have a bit of ground to make up with Dynamic One, who he was fourth to in the Blame Stakes on June 22, and also last time when taking silver behind Olympiad in the Grade 2 Stephen Foster Stakes, also at Churchill Downs.

Top wins to runs record with 5 successes from 8 starts. This well-bred (Curlin) 4 year-old colt was last seen going down in a fight with Dynamic One in the Grade 2 Suburban Stakes at Belmont Park. Been training hard in the Spa since that last run in early July and is the son of the 2007 and 2008 winner of this race – Curlin. Also handled by the Shug McGaughey team that have a fine record in this race with wins in 1985, 1989. 1993 and most recently in 2019 with Code Of Honor. Certainly not one to discount. Jockey Luis Saez is yet to win the Jockey Club Gold Cup.

Yet another entry for the Todd Pletcher stable and will be ridden by Joel Rosario, who won this race in 2012 (Flat Out) and 2014 (Tonalist). Won on debut for his new yard at Saratoga on July 22 in what was only an allowance race (for horses with just one career success outside restricted races). Last season he was 6th in the 2021 Kentucky Derby and 4th in the Preakness Stakes, plus was only beaten 1/2 a length in the 2021 Jim Dandy Stakes. Bit to prove, but will stay the 1m2f trip will and his return run last time was eye-catching.

Another from the army of possible runners from the Todd Pletcher yard and heads here with a leading chance. Winning of the Blame Stakes at Churchill Downs on June 2 and had Americanrevolution back in fourth that day too. Backed that up with a hard-fought success over another possible entry here – First Captain – when taking the Suburban Stakes by just a nose at Belmont Park on July 9 (Untreated 3rd). Based on those runs is certainly a player despite having to probably improve a tad to figure. Jockey Ortiz Jr does have pedigree in the race though – winning for Pletcher in 2020 on Happy Saver and also back in 2017 (Diversify).