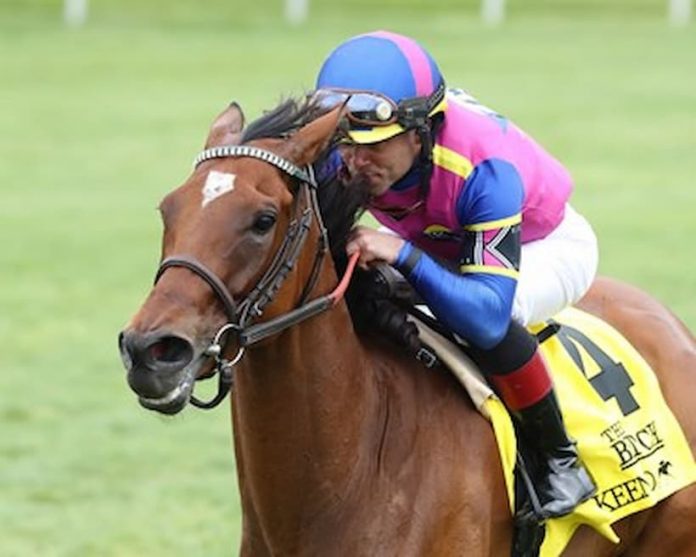 War Like Goddess, who won the 2021 Flower Bowl Stakes, will be a popular pick to defend her crown in the Saratoga Grade 2 contest this Saturday at the New York track. The Bill Mott-trained 5 year-old landed the race by 2 1/4 lengths 12 months ago and has taken the same route as last year by winning the Glen Falls Stakes at Saratoga on Aug 6. She’ll be all the rage to follow-up in the 2022 renewal.

The 1 3/8m Flower Bowl Stakes had previously been run as a Grade 1 race, but will be run for the first time in 2022 as a Grade 2 after being downgraded by the American Graded Stakes Committee.

However, despite losing its Grade 1 tag, the contest still has a Breeders’ Cup Filly and Mare Turf ‘win and you’re in’ bonus attached to it – meaning the winner of Saturday’s race gets entry to the Breeders’ Cup at Keeneland on Nov 5.

When Is The 2022 Flower Bowl Invitational Stakes?

Run over a distance of 1 3/8m, the Grade 2 Flower Bowl Stakes is staged at Saratoga racetrack in New York.

War Like Goddess Can Defend Her Flower Bowl Crown

Yes, War Like Goddess is another year older than when taking the Flower Bowl 12 months ago, but she’s still only a 5 year-old and has been lightly-raced this season with this race clearly a big target again for her.

The Bill Mott filly has only been out twice this season and both outings have been winning ones. She took the Grade 3 Bewitch Stakes at Keeneland on April 29 with ease and backed that up by winning the Grade 2 Glen Falls Stakes at Saratoga on Aug 6 (watch below) – a race she also took 12 months ago before winning the Flower Bowl.

Connections have opted for exactly the same route with War Like Goddess this season so with that in mind and the fact she’s clearly trained on as a 5 year-old – then she gets the verdict to back-up her success in this race from 12 months ago.

She can follow the likes of Stephanie’s Kitten (2014/15) and Riskaverse (2004/05) as recent ‘back-to-back’ winners of the Flower Bowl Stakes and provide her trainer William Mott with a record-equalling sixth win in this Grade 2.

BACK WAR LIKE GODDESS for Saturday’s Grade 2 Flower Bowl Stakes with BOVADA and receive a 100% welcome bonus (up to $1,000) to use on the race.

Bill Mott, who trains the leading fancy and last year’s winner – War Like Goddess – has a top record in the Flower Bowl Stakes, with five past successes.

Mott needs just one more win to equal the impressive more recent haul of six wins by the Chad Brown barn, but with War Like Goddess expected to be a warm order this Saturday there is every chance Mott will be top of the honours list in this race again come the weekend.

Bill Mott’s first Flower Bowl Stakes win came back in 1988 with Gaily Gaily and then added two wins in 1994 and 1995 with Dahlia’s Dreamer and Northern Emerald. He had to wait until 2008 for his next victory when Dynaforce did the business, while his most recent win came, of course, 12 months ago with War Like Goddess who is back for more in 2022.

The Chad Brown stable have a cracking record in the Flower Bowl Stakes too – winning the race six times and are the winning-most trainer in the races history.

It’s clearly a prize that Brown loves to have on his radar each season and this year is no different with three of the seven Flower Bowl Stakes 2022 entries coming from his stable – Capital Structure, Virginia Joy and Marvelous Maude.

Who Are The Main Threats To War Like Goddess?

As mentioned, the Chad Brown yard love to target this race and with three runners they will be trying to lower the colours of last year’s winner – War Like Goddess.

Their Marvelous Maude heads here in winning form after taking two allowance races but this is clearly a big step up into Graded company, so you feel she’ll need to find a bit extra.

Brown also has Capital Structure in the race and this 5 year-old will be ridden by the 2017 winning jockey Jose Ortiz. She is also a recent winner after landing an Allowance Optional Claimer too at Saratoga on July 31 and has only had two runs this year. She’ll need to step up again, but is a filly going in the right direction.

Flanigan’s Cove was 4th behind War Like Goddess in the Glen Falls Stakes last time out, but was only 3 lengths adrift of the Mott filly and could get a bit closer this time over the slightly shorter trip. The negative though is that she’s 0-from-4 this year.

Costana is another that’s up in grade so would need to take a step forward, so the other that’s a bigger threat to War Like Goddess looks to be the final Chad Brown runner – VIRGINIA JOY.

This 5 year-old also ran in the Glen Falls Stakes last time, but was third and only back 1 3/4 lengths from War Like Goddess. Prior to that run she was a fine 4th (beaten only a length) in the New York Stakes at Belmont Park and on May 7 was a cracking 14 length winner of the Grade 2 Sheepshead Bay Stakes (watch below) again at Belmont.

With five wins from her 13 career runs and nine top three finishes, she’s a filly that knows how to get her head in front and looks the most likely to give last year’s winner the most to think about.

BACK VIRGINIA JOY for Saturday’s Grade 2 Flower Bowl Stakes with BOVADA and receive a 100% welcome bonus (up to $1,000) to use on the race.

DID YOU KNOW? Trainers Chad Brown and Bill Mott have eleven Flower Bowl Stakes wins between them