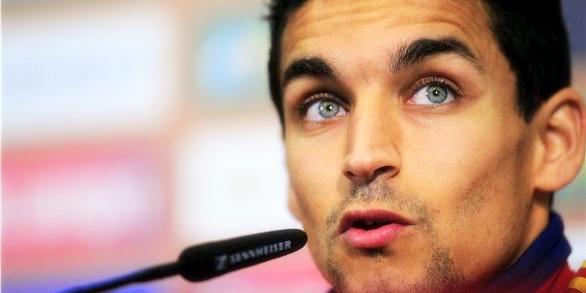 Sevilla winger Jesus Navas has issued a subtle come and get me plea to Manchester City by admitting his admiration for the club. Navas is an extremely talented player who has been linked with various moves away from the club for his entire life.

However, his anxiety disorder which has prevented him from moves in the past may now be slightly less of a problem after Navas admitted to liking and admiring the former Premier League champions.

Jesus Navas was quoted in the Sun newspaper as saying:

Manchester City have a clear necessity for a high profile and experienced winger in their current squad and someone who can improve the current team, moving them forward. Navas is someone who knows how to play down either wing of the pitch well and someone who has spent years crafting his skills in that position.

His presence in the contemporary City side will automatically offer them more width and at 27-years-old he’d be moving to the Etihad Stadium at the very peak of his career.

If Manuel Pellegrini is confirmed as the next Manchester City boss then it will make the move even more appealing to Jesus Navas and his anxiety disorder because it will offer some form of familiarity to the winger.

Pellegrini is someone who has years of experience in Spanish football and he’s someone who will already have a good knowledge of Navas as a player, which should ease any doubts and worries the player has.

It’s the father figure quality that Pellegrini has which could make this deal happen because Navas has had the opportunity to join some very big clubs in the past.

Sevilla boss Unai Emery has admitted that the club are virtually confined to seeing Jesus Navas leave and equipped with his comments, it gives City the green light to try and put together an official deal. Emery said:

“Everything indicates he will leave.”

Other sides could still come into the equation with official bids, but it seems that the illness Jesus Navas has suffered with throughout his career means it will take a very particular set of circumstances to get him even contemplating a move away from Sevilla.

Manchester City seem to have that set of circumstances and the resources needed to pull off the move, but it will rest on whether Pellegrini is appointed officially as the club’s next manager.