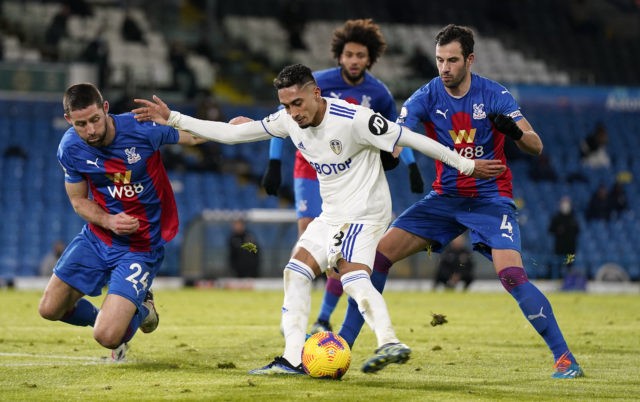 Patrick Bamford scored the 100th goal of his career as Leeds United edged out Crystal Palace with a comfortable 2-0 win on Monday night.

Jack Harrison scored the other goal inside the opening three minutes as Leeds picked up all three points and jumped to the top half of the Premier League table.

It was a completely dominant performance from the home side, with Bamford grabbing all the headlines in the UK press today.

Former Leeds United forward and club hero Jermaine Beckford posted a series of tweets last night during the Leeds game and, needless to say, he was very impressed.

Name me a team in the premier league that are more exciting to watch than @LUFC I’ll wait… #MOT #LEECRY #Bamford #Raphinha 🔥 pic.twitter.com/2GMVotqvWs

The former Leeds striker also posted a clip of Raphinha’s skill against the Eagles. In fact, Raphinha was simply outstanding last night, with Phil Hay of The Athletic waxing lyrical over his efforts.

Cooper terrific, Klich much closer to his best. Raphinha a box of tricks but the key point about him is that he seems to turn up game after game. Looking outstanding and consistently so. #lufc

Lucas Radebe, another former great Leeds player, described it as a ‘sterling performance’ from the Whites.

Gary Lineker, the former great England striker and now a popular BBC pundit, has made an observation that will please the Leeds fans.

He praised the brand of football played under Marcelo Bielsa and suggests it would be a great achievement if they can consolidate their position in the top half of the table.

That win takes @LUFC into the top half. If they maintain that it would be a great achievement in their first season back in the top flight. What’s more they’ve done it playing attractive, open football that makes every game good to watch. Their bus is never parked. Refreshing. 👏🏻

Bamford created a good opportunity for himself in the first half when he anticipated a wrong pass from Luka Milivojevic and then escaped from Gary Cahill to rush quickly towards the goal.

He was under no pressure, was on his favourite left-foot as well, but only managed to sky it over the bar. However, Bamford has proved this season that he is a solid Premier League striker, and many pundits feel that he now deserves a chance to play for his country.