Javier Hernandez: Why he’s the joker in Ferguson’s pack 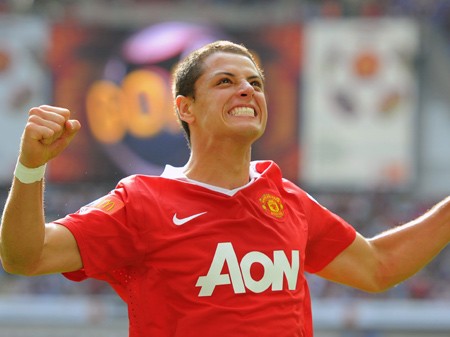 Okay fair enough, firstly that fact wasn’t that much ‘fun’ and secondly he’s not too small, standing at a height of 1.73 metres. Still, if you take this brief piece of statistical summarisation as a measuring stick, Hernandez falls well below the average heights, which are mostly well into the 180 centimetre marks. Indeed if you didn’t hear that Hernandez looked a little small in the summer, you probably didn’t read too much about Javier ‘Chicarito’ Hernandez. Even according to his ESPN profile, among his weaknesses is listed ‘…he lacks the physical strength required in the Premier League…’

Of course that was written before Little Pea Hernandez rattled in 15 goals in 17 starts and 17 appearances for United.

Hardly the strike rate of a player struggling to adjust to the pace and strength of our beloved league. If you want some kind of further idea as to what that means this season, then heres some more stat based fun: In 29 starts and one substitute appearance for Liverpool and now Chelsea, Torres scored 9 goals. Didier Drogba? 28 starts, 7 substitute appearances, 10 goals. Goals wise, Javier Hernandez is out doing them both. (Although it should be noted that Drogba has alot of assists too.)

More fun fact fun: Football teams want to cause eachother as many problems in as many areas as possible, naturally. So alot of the time when teams look for a player they are looking for one with as many footballing talents as possible. It’s why Andy Carroll was more desired in higher footballing circles then someone like Darren Bent – one with ariel power, finishing ability, physical power and a team player, and the other being Darren Bent and his poaching. (Which, I will add, is great in knockout tournaments, but isn’t quite enough in the very highest leagues to play for the best.) Clubs obviously, desire the players who can benefit them more.

So what this brings about is Super Strikers. (Those of you familiar with Football Manager know this role as the ‘complete striker’) All the big clubs want them. They are players with pace, power, ariel ability, great technique, creativity and finishing ability – players with everything. Step forward Chelsea (Fernando Torres and Didier Drogba) Manchester United (Berbatov and Rooney) Manchester City (Dzeko and previously, Adebayour) and maybe Liverpool (Hopefully Andy Carroll, and you could possibly argue for Suarez’ inclusion too.)

They are so wanted because apparently they can score goals in any situation. For example – Wigan pressing you high up the pitch? Torres can run in behind. Everton sitting deep? Send Torres in to make the game winning headers. Stale mate game where you need a goal out of nothing? Torres is your man. You have midfielders who can make forward runs but your forward needs creativity? Torres is your man. They are the spearhead for your title winning machine, players who regardless of the situation can get you goals.

Torres, and his various goals.

Of course, managers adapt to these players, as they constantly have to adapt to everything that changes in football. Lets say for example that you are Stoke. You know you are going to be on the back foot alot, probably hemmed into your own box for a fair portion of the game. So you deal with one aspect of the super striker – you deal with him arially with powerful defenders, sit back and elminate his running in behind with that particular tactic. Then you are hoping that said super striker doesn’t grab a goal out of absolutely nothing, and bingo – key threat erased, just have to think about the other nine outfield world class players.

Yes, there are lots of types of defenders in the premier league – but if there is one symettrical aspect to the majority of them it is that they are strong – because the mnajority of defenders have to accept they will be doing alot of defending against the very top teams. Probably, in the box, for fear of said top team passing through you.

Javier Hernandez is everything that a superstriker is not.

Where Hernandez isn’t big and strong, he is very quick and very agile, and his movement in the box is excellent – attributes that defenders are both less and less used to playing and less and less trained to play them. Where he can’t really play a target man role, off the shoulder of a defender he is amongthe most deadly strikers in the game, as he has demonstrated numerous times this season.

Where he is not particularly creative, his finishing is both varied and very efficient, and game winning – in numerous game he has scored vital goals to United picking up points. He is everything that a super striker is not – great, because in a time where the trend will be to increasingly stop super strikers, Hernandez fits. Far from being ‘not strong enough for the premier league’ Hernandez is perhaps a step ahead of the premier leagues defenders – in that he brings a whole new set of tricks to to strikers role that defenders are less suited to now then ever.

To finish, heres some of his goals.  Enjoy.