Real Madrid midfielder, James Rodriguez, has been linked with a move away from Santiago Bernabeu since the end of last season.

As per the latest reports, the Colombian attacking midfielder could finally be on his way when the transfer window re-opens next month. Daily Mail are reporting that Los Blancos are willing to sell the player and have already informed him that he is free to leave the club. The report also adds that Rodriguez prefers a move to England and would like to join Antonio Conte‘s side, Chelsea.

Rodriguez recently claimed that he is not sure if he will continue at Real Madrid, and that he has received offers from other clubs. The player was then criticised by teammate, Sergio Ramos, for making such a statement shortly after winning the Club World Cup.

The Colombian is clearly unhappy at Real Madrid due to the limited game time. Since the departure of Ancelotti, James has struggled to hold down a regular starting berth and has been benched for several important games by Zidane.

Rodriguez is a world class footballer and deserves to play regularly. If he decides to quit Real Madrid, one can hardly blame him. He had a fine debut season with Los Blancos and a memorable World Cup with Colombia, as well. His talent is clearly visible, but injuries and the change of manager have affected his career in a negative way. Perhaps a move really is the best option for Rodriguez at this point.

Real Madrid will be looking to recoup most of the €80 million they spent on the player. Jorge Mendes is thought to be handling the situation at the moment.

Colombian newspaper El Colombiano are reporting that James is in Colombia right now with his family and is using this time to apply for a British visa. 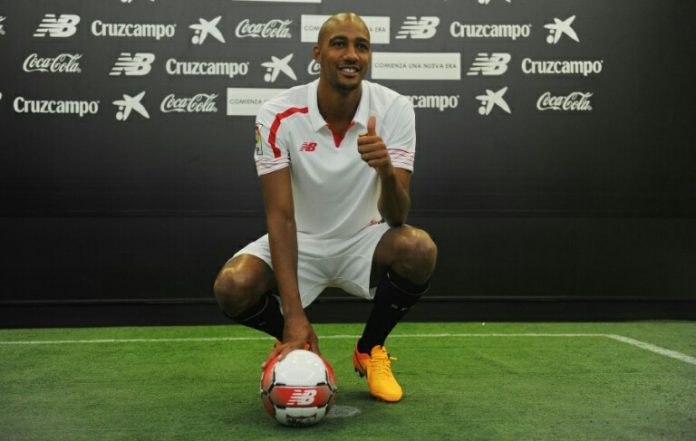 In other news, Chelsea are looking to sign the Sevilla midfielder, Steven N’Zonzi. The former Stoke City midfielder has impressed for the La Liga outfit, and Conte is keen on signing him.

Estadio Deportivo are reporting that N’Zonzi is happy at Sevilla, but the offers from abroad are tempting the player. The Sevilla midfielder is expected to sign a new deal with the club, but the money being offered by other clubs could change his mind. Apparently, Manchester City and Chelsea are interested in the player, and they would be willing to pay his release clause during the January transfer window.

Jorge Sampaoli convinced him to snub Leicester‘s advances during the summer window, and it will be interesting to see how he responds now. An offer from Chelsea or Manchester City cannot be overlooked easily. Furthermore, a chance to return to the Premier League is also an added incentive.