According to reports today in Italian daily Gazzetta Dello Sport, Manchester United are in talks with Juventus over a possible move for €40m rated midfielder Arturo Vidal. The newspaper also provided a snippet of the recent developments in their front page this morning. 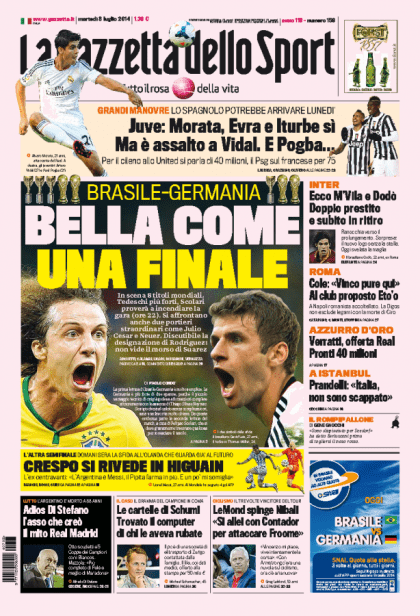 It is believed that the Bianconeri have huge plans in the summer and are planning to complete the purchases of Alvaro Morata, Patrice Evra and Juan Iturbe to launch a Champions League challenge in the coming 2014-15 campaign.

This would thus pressurize the Old Lady to sell one of their prized assets to fund moves for their transfer targets. The report claims that the Serie A champions are prepared for any eventuality despite having earlier told the Red Devils to shell out €40m for Vidal.

The price tag won’t deter United as the Old Trafford outfit have a huge transfer kitty to get back on track after a disastrous 2013-14 season. Manager Louis Van Gaal is set to usher a new era and the Independent has claimed that the Dutch legend has made Vidal his top transfer priority.

Soccerlens view: French Ligue One champions PSG are also set to offer €75m to Juventus for Paul Pogba, the news which was earlier tweeted by French journalist Jonathan Johnson.

Juventus surely don’t want to lose two world class midfielders in one transfer window, hence going by pure financial terms, a deal for Pogba is more likely to be accepted than Vidal’s from United. Moreover, will the Chilean himself ditch his Champions League aspirations to sign on the dotted lines at Old Trafford?