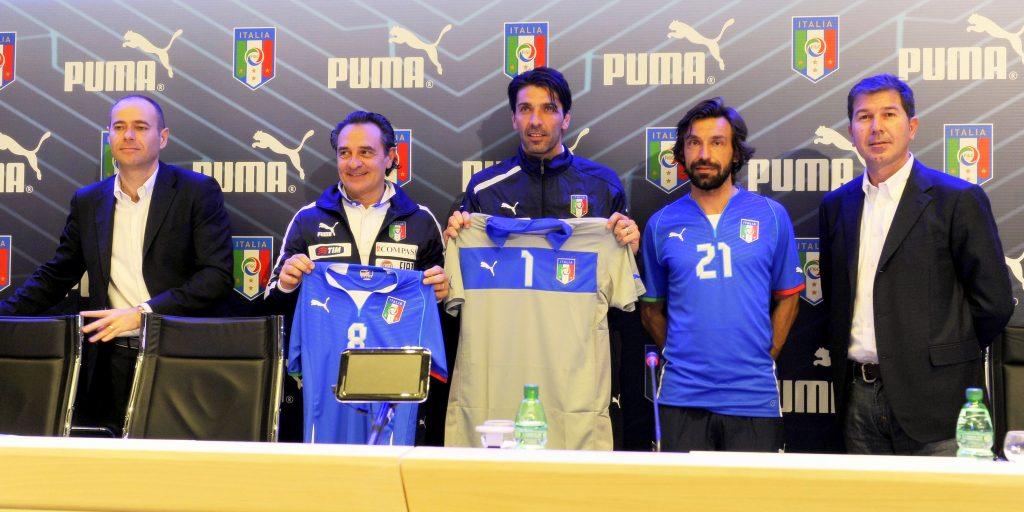 Puma has revealed the Italy 2013 kit for the FIFA Confederations Cup.

In an event held in the training ground and headquarters of the Italian Football Federation (FIGC) in Coverciano, Florence, Italy, Puma presented the new kit with the help of Gianluigi Buffon and Andrea Pirlo to the press.

This kit will be debuted against the 2013 Confederations Cup hosts Brazil in this week’s match in Geneva, Switzerland.

The kit features enhanced moisture management through the use of a fabric made of recycled polyester and activated carbon made from coconut shells, called Cocona.

The new design has a striking look, including an embossed Power graphic that fades from bold to light. The visual design emphasises the physical aspect of a player even more prominently which adds to the Azzurri’s already physical playing style.

Pirlo and Buffon’s Juventus teammate Giorgio Chiellini was also present at the event. He commented:

“The design is very impressive, especially the way the colours of the Italian flag have been incorporated.

“It fills me with pride to wear this Italian shirt and I am excited about the prospect of representing our footballing nation in the upcoming Confederations Cup in Brazil.”

“We are proud of our national team, also for their Confederations Cup qualification following their excellent performances in Poland and Ukraine last summer.

“To honour this achievement, we have created a new design for the Azzurri to wear in Brazil that conveys a strong feeling of national pride. We wish them well in representing Europe this summer.”

The new 2013 Italy kit is available to buy now.